KIEV, 29 Jul — RIA Novosti. The President of Ukraine Petro Poroshenko will not be able to increase his rating before elections of the head of state, despite the pretentious statements, the Director of the Ukrainian Institute of policy analysis and management Ruslan Bortnik. 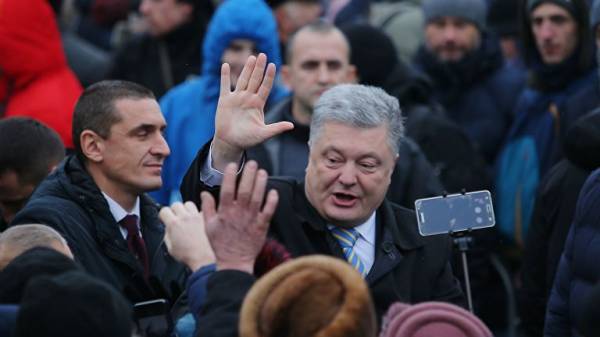 Poroshenko on Tuesday announced that he intends to run for a second term. He stated that the 2024 bid for accession to the EU and noted the need for a “cold peace” with Russia.

“By and large, did these statements, this forum will not affect its ratings. Though the performance is good as always, balanced, pretentious, well-illustrated. But it’s from a parallel reality that does not intersect with the one in which the society lives. Theses are absolutely standard, no new thesis,” — said RIA Novosti Bortnik.

The expert believes that the forum in which Poroshenko announced his intention to run, became his “weak point”.

“The President has failed to collect all the desired circles. Absent (ex-Prime Minister Arseniy) Yatsenyuk and (interior Minister Arsen) Avakov (singer Svyatoslav) what (former non-canonical Church structures, schismatic) Filaret, the two presidents of Ukraine Leonid Kravchuk and Leonid Kuchma. The President failed to demonstrate the unity of command authority and support of the course for all political Beau Monde of Ukraine”, — he said.

The analyst believes that the absence of many politicians and famous personalities on the forum can be a “sign” for the elites on further support of the President.

Presidential elections will be held in Ukraine on 31 March. The campaign began on December 31, the same day began the nomination of candidates and submission of documents to the CEC for registration. The Commission has registered more than 20 candidates.