The detainee’s father, Senator Arashukova is suspected of theft from Gazprom

His son, as believes a consequence, murder of two persons/ 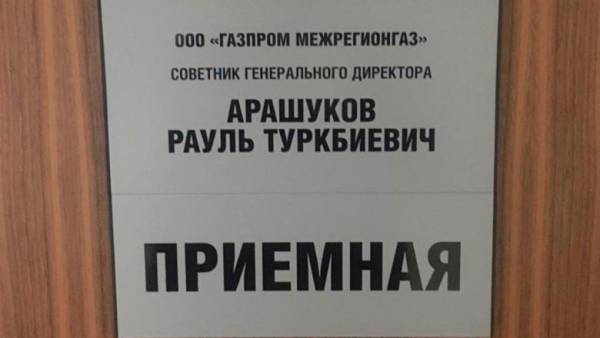 Raul Arashukov, father of the Senator from Karachay-Cherkessia Rauf Arashukov detained on a criminal case of theft of natural gas Gazprom supplied in the North Caucasus Federal district, amounting to more than 30 billion rubles, said the Investigative Committee of Russia. According to investigators, the theft occurred over several years. A criminal case was opened under part 4 of article 159 of the Criminal code (maximum penalty — imprisonment for up to 10 years with a fine in the amount up to RUB 1 million). The detention occurred in the office of “Gazprom” in St. Petersburg, said “Interfax” citing a source.

Rauf Arashukov was arrested earlier Wednesday in the meeting hall of the Federation Council. As stated by SKR, it may be involved in the murders of two people and other crimes.

Arashukov, Sr., like his son, doesn’t admit the guilt, reports TASS citing a source familiar with the situation. “He says he is innocent. And hopes for a fair trial”, — the source said about the Senator.

Law enforcement agencies hold events for the decriminalization of the Karachay-Cherkess Republic in the context of what happened the detention Arshakovich, said SK. Searches and other investigative actions are at least seven Russian cities: Moscow, Saint-Petersburg, Stavropol, Makhachkala, Nevinnomyssk, Budennovsk, Astrakhan, the report said.