The Ambassador of Japan: in Tokyo pleased with the results of the January meeting of Putin and Abe

MOSCOW, January 29. /TASS/. Tokyo pleased with the results on the 22 January talks with Russian President Vladimir Putin and Prime Minister of Japan Shinzo Abe. In an interview with TASS said the Japanese Ambassador in Moscow Touchesa Kozuki. 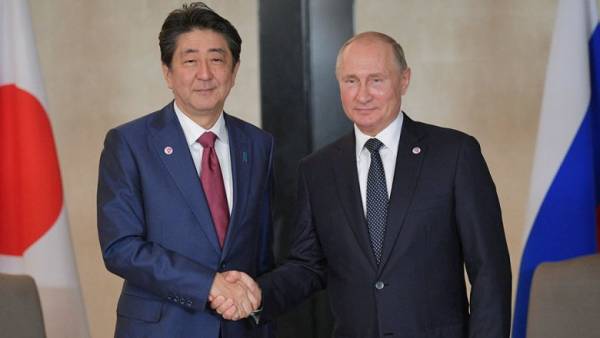 “The leaders had a Frank exchange of views on the issue of signing a peace Treaty. They agreed to give guidance at the working level on a consistent and rapid advancement of joint work on the early realization of joint economic activities on the four Islands,” said the diplomat.

“Speaking of humanitarian measures for former inhabitants of Islands, the parties came to a common opinion about the organization visit the graves of their ancestors with the help of air travel this summer”, — said the Agency interlocutor.

“The leaders welcomed the development of cooperation in economy and humanitarian exchanges, including the implementation of the plan of cooperation of the eight points, and come to a consensus on the acceleration of positive trends — continued Kazuki. — In the debate on the international situation, the parties had a candid exchange of views and reaffirmed their intention to continue working closely on the issue of denuclearization of the Korean Peninsula”.

“Thus, the two leaders held a Frank discussion on the prospects of Russian-Japanese cooperation in different spheres. I believe that the meeting was a good beginning for our relationship in 2019,” — said the Ambassador.

give Kuriles? What peace Treaty? Answer the main questions of disputed Islands

For Russia sovereignty over the Kuril Islands is unquestionable. But Moscow is ready to go to find such a compromise acceptable to both sides.