The Federation Council stripped the immunity of Senator from Karachay-Cherkessia Rauf Arashukov, reported by Russian news agencies, citing sources. Mr. Arashukov have been detained and removed from the courtroom. 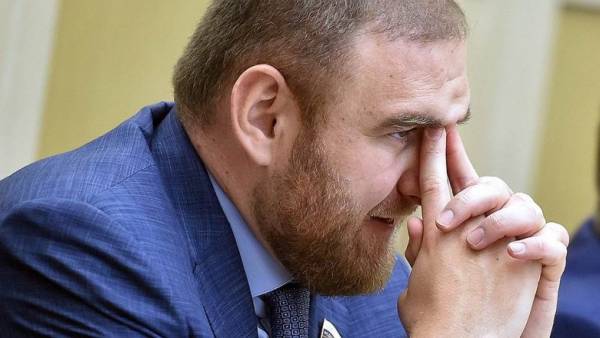 The Federation Council today decided to start the meeting behind closed doors to discuss “organisational matters”. Stream from the courtroom for journalists was interrupted five minutes before the start of the meeting.

The youngest Senator of Russia Arashukova was detained by investigators of the RCDS in conjunction with the economic security service of FSB. “He was detained in the framework of the investigated criminal case”, — is spoken in the message of the TFR on Twitter.

The source of Interfax said that the detention occurred in connection with a murder committed in 2010 (in 2010, Rauf Arashukov turned 24). According to the source TASS, he is accused of several crimes, including organizing a criminal community. The source of “RIA Novosti” reported that the reason for the detention could be fake documentson the basis of which Mr. Arashukov became a Senator in 2016.

Earlier, as reported by RBC, the testimony Rauf Arashukov in cases of murder were given three. As they say the defendants during interrogations in 2010, Rauf Arashukov was allocated by 500 thousand rbl. to “to intimidate and beat” the adviser of the President of KCHR Frala Shebzukhova, and 1 million roubles to the murder of Aslan Zhukov.

In the United Arab Emirates against Rauf Arashukov opened a criminal case on falsification of documents. Mr. Arashukov allegedly forged residence permit issued by the authorities of the Emirates. It was fixed expiry date document — February 2017 August 2016. The fraud was necessary in order to take the Senate seat.