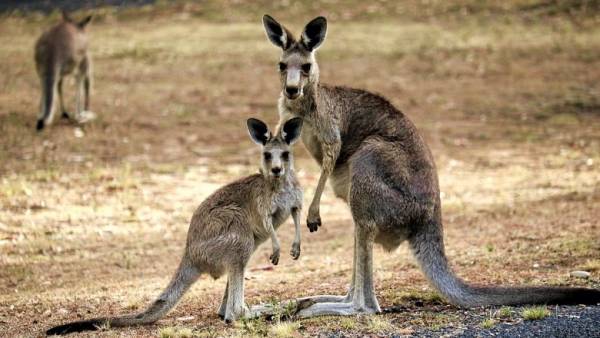 SYDNEY, January 29. /Offset. TASS Anna ARKAEA/. About 30 million years ago in the Australian rain forest a small animal, like a possum, descended from the trees, learned how to cross vast plains of the continent and became the ancestor of the Australian kangaroo. In detail about the history of their origin and development told ABC television and radio.

Scientists from Australia’s University of Melbourne, together with colleagues from Queensland University of technology, conducted a full-scale study of modern kangaroos and analyzed DNA extracted from fossils of their distant ancestors, in order to understand when and how Australia has seen these animals.

They are so different

One of the most famous ancestors of modern kangaroos were prehistoric protocolicon — 300-pound representative of the continent’s megafauna, which became extinct about 15 million years ago. Scientists believe that he was so big that moving is not as modern marsupials, jumping, and walked on its hind legs like a real dinosaur.

“It is their descendants we see when watching the biggest in Australia red kangaroo. These beauties impress under two meters tall and weighing 100 kg, looking at them, you can imagine how they looked like giant ancestors,” — said the ecologist, wildlife researcher from the University of Melbourne Graham Coulson.

However, according to the scientist, among the ancestors of the kangaroo, which appeared about 30 million years ago, were not only giants, but also very tiny creatures. “Today in the tropical forests of Queensland to meet an amazing creature — a musky kangaroo rat. It fits in the palm of an adult and weighs less than half kg, however this kind of unique, because it is there are tens of millions of years, says Coulson. — Here it is: the giants died or diminished, but this little one was left almost exactly such what were its ancestors”.