In Yekaterinburg the man rescued from fire of three children. For this he was given a fire extinguisher

30-year-old Gevorg Avetisyan made from burning building two girls and a boy. As a thank you to MOE he handed the certificate and a fire extinguisher. 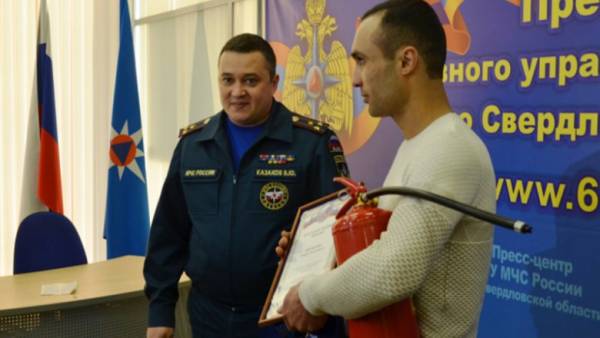 In Yekaterinburg, a 30-year-old Gevorg Avetisyan saved three children during a fire in a private house. A man drove past in the car when she noticed a burning building and calling to help children. Among them ― two 12-year-old girl and 10-year-old boy, left without adult supervision.

As reported on the website of the regional emergencies Ministry, the way to salvation through the doors was cut off by fire. So Avetisyan broke the window with a brick and pulled children. In addition, near the burning house was the car that George was protected from the fire, oboxious in a safe place.

“When I pulled children from a burning house, I wasn’t thinking about anything, I had to save the guys, and I was able to do it, so very happy”, ― said Gevorg.

None of the children were not injured. MOE was awarded the letter of gratitude “for their caring, courageous and decisive action.” And also gave him the fire extinguisher.