Who kissed the barmen? From what you lamplighters? Than fragrant goldsmith? That smoked degregory? Tell. 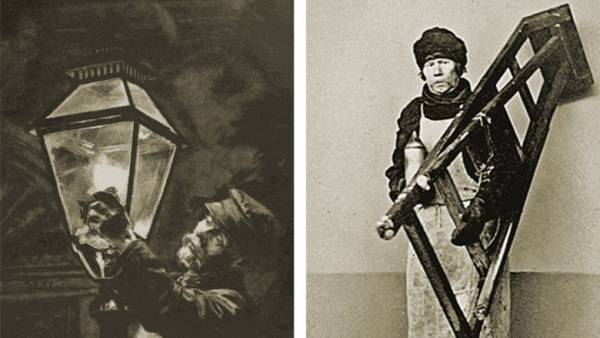 In 1718 Peter I issued a decree on street lighting city of St. Petersburg. No sooner said than done. Scored special people, each of whom served 15 lamps: lighted, extinguished, cleaned, refueled, changed the burnt wick.

“You know me by my catchphrase”: collect stereotypes about professions

The first lights burning only till midnight and only on moonless nights. Just 18 per month, and only from September to may. Refueled is a miracle of technology hemp oil: “food a pleasant taste, but the lights are not so bright because it is made from raw hemp, another of dried cannabis, in bringing, no.” Lamplighters rightly believed that sin is good to disappear, since it still burns so-so, and part of the lamp filling is left to the family table.

Had lights at that time and another property: they are splashing. “Then, for God’s sake, further from the light! And soon as possible soon pass by. This, luckily, if you get off the fact that he’ll put a nifty coat your smelly your oil,” — he warned Gogol “Nevsky Prospekt”.

Through century with unnecessary to replace the oil came alcohol. Hard work lamplighter, which from post to post with a load had to pass in the day of about 6 km, acquired an additional charm.

As he made his usual crawl, spirits of light became smaller, and in the belly of the lamplighter it, on the contrary, splashed more and more. And so came the expression “to opearate”.

The authorities of embezzlement of state property did not understand and began to add to the alcohol with a strong smelling liquid. For the experiment, was in charge of public lighting brandmayor Bering summoned well-known love of booze subordinate. Blended “cocktail” that brought him and asked, “Well?” And the answer was: “Nothing, your Excellency! Sturdy, and you can drink”.

In 1863, on improved street lighting was a competition. It was won by Frenchman Batali, defeating a Russian invention — a flashlight that worked on the pine cones is proposed to use kerosene. The streets became lighter, fashionably dressed people loved to take an evening stroll — it was now possible to see each other. Oh, and then progress it started at a gallop and soon the people already could not live without electricity. Lights began to turn on automatically, and the job of lamplighter lost relevance.

Strange name concealed under a rather prosaic nature: barmen was the name of the people responsible for the collection of taxes, custom duties, execution of court decisions. This is a great-great-grandfather of our tax specialists, customs officers and court bailiffs. Was chosen for the post in the districts and suburbs the most decent of the whole world. Upon joining office, the candidate kissed the cross, pledging to serve honestly.

looks Like the most beautiful girl in the world-the trucker

The first mention of the barmen found in the Sudebnik 1497. Until the seventeenth century, they acted independently, helping rural, lip heads to catch thieves and robbers, collect taxes, etc., and after the time of Troubles has passed in the category of officials, but without their rights.

Moreover, from the barmen needed assurances that fees from year to year will not be reduced. If this happened, the arrears fell on the shoulders of the publican as his personal debt to the Treasury.