Scientists from the University of Tennessee has discovered a Salamander Gyrinophilus gulolineatus size of about 23,8 cm, significantly larger than known up to this point, the cave salamanders. On average, they do not grow more than 12-14 cm were considered to be due to the difficult living conditions in the caves and under the ground. 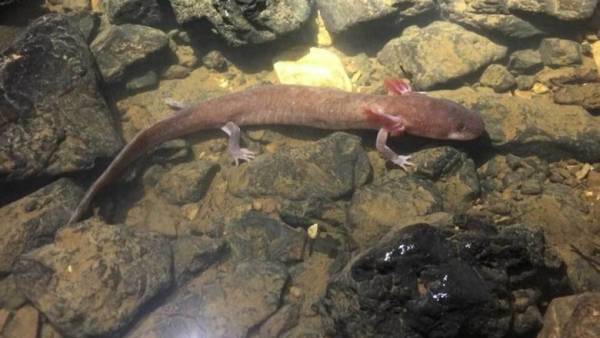 In an article published in the journal Subterranean Biology, said that the found species — record species Gyrinophilus gulolineatus, kind of spring salamanders (Gyrinophilus) and the whole family beshegoch salamanders (Plethodontidae) ever observed in the United States.

Belgachia salamanders belong to the order of tailed amphibians, and, as you can guess from the title, their main feature — the absence of light, these animals breathe through the skin. This family lives mostly in North and South America. Among beshegoch Salamander is a species living in caves and underground. They usually are small dimensions, believed to be due to features of the environment.

American scientists found species is a rare sight under the protection of the environmental Agency of the United States.

The article notes that most likely its size even reached 25 centimeters, as found a Salamander with partially loose tail. The body length of the amphibians 14.5 cm, weight 35 grams. The animal was found in the Berry cave in the County of roan, Tennessee. After measuring and recording, a Salamander marked with a special injection and released into the environment.

The authors note that about cave salamanders yet, very little is known: they live in such conditions where they are difficult to study. However, among zoologists who study amphibians, there is the idea of the connection sizes of species and habitat conditions. The discovery casts doubt on whether life in caves and underground leads directly to the small body size of these salamanders in comparison with other species.