77% of Russians oppose the transfer of Japan South Kuril Islands, the survey showed

MOSCOW, January 28 — RIA Novosti. The majority of Russians (79%) know that Japan demands from Russia for the transfer of the four southern Kuril Islands, however, 77% of Russian citizens oppose the transfer of such data provided the all-Russia centre of studying of public opinion (VTSIOM). 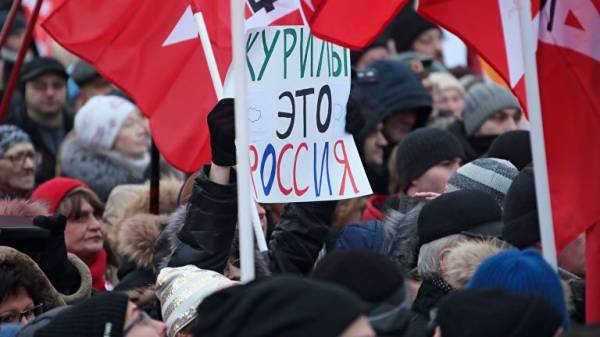 Relations between Russia and Japan for many years overshadows the absence of a peace Treaty. Japan claims the Islands of Kunashir, Shikotan, Iturup and Habomai, referring to bilateral Treatise on trade and borders of 1855. In 1956, the Soviet Union hoped that the Joint Declaration of the two countries put an end to the territorial dispute, but Japan considered the document only part of the solution, not abandoning claims to all the Islands. Moscow’s position on Japan’s claims is that the Islands became part of the Soviet Union at the end of the Second world war and the Russian sovereignty over them cannot be questioned.

“The requirement to return to Japan the southern Kuril Islands know 79% of Russians… Three quarters (77%) of respondents oppose the transfer of the southern Islands of Japan. Their point of view, respondents argue primarily that the issue has been resolved, these Islands belong to Russia (29%). Every tenth (10%) argues that we conquered these Islands,” — noted in the study, received by RIA Novosti.

That should give Japan the southern Kuril Islands, said 14% of respondents, primarily for the sake of concluding a peace Treaty and the development of relations between the two countries (7%).

VTSIOM said the strengthening of the view that when engagement with Japan on the issue of the South Kuril Islands negotiations should continue as long as necessary to come to a mutually acceptable solution ( 35% in 2009 to 51% in 2018). Prompt signing of a peace Treaty with possible damage to the interests of Russia, as well as the termination of cooperation with Japan on this issue supports the minority ( 13%).

“The question of belonging of the South Kuril Islands for several decades, is the focus of attention of most Russians. Any hint of an opportunity to give the island of Japan is, as a rule, the indignant reaction of the society. People don’t understand, why give the island who genuinely believe the Russian, and I fear a chain reaction of revision of results of world war II, which include the issue of ownership of the Islands,” commented the results of the study to the General Director of VTSIOM Valery Fedorov.

“Therefore, our main public demand to the Russian-Japanese negotiations — not an early achievement of any result, and effective from the point of view of our interests the result — irrespective of time, which you will have to spend on his achievement,” he added.

Earlier Russian presidential aide Yury Ushakov said that the desire of Japan concerning the Kuril Islands discussion, Russia their land will not give up. According to him, the key to solving the problem of a peace Treaty is the recognition of Tokyo outcome of world war II and Russia’s sovereignty over the Kuril Islands.