USA made a split in the UN security Council, imposing their agenda on Venezuela

UN, January 27. /TASS/. The Security Council (SC) UN convened at the initiative of the United States emergency meeting on Saturday failed to agree on a joint statement on the situation in Venezuela. 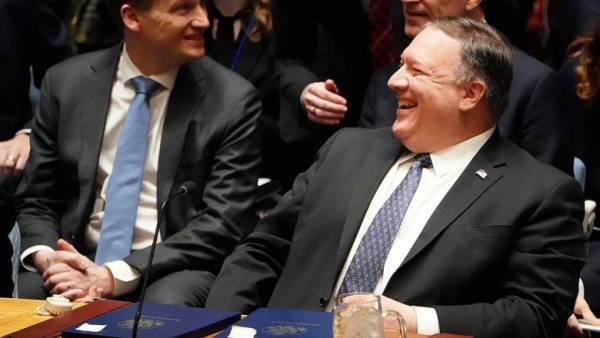 The United States has managed to impose on the participants of the meeting, its agenda, despite the objections of Russia and some other countries, according to which the events in Venezuela are its internal matter and should not be discussed in the security Council. To discuss, in the opinion of these countries as well as Venezuela’s, would the United States meddling in the Affairs of sovereign States.

The ensuing discussion demonstrated the schism in the world community, one whose members did not hesitate, spoke the language of ultimatums and threats, while others appealed to international law and the principle of non-interference in the Affairs of other States.

Permanent representative to the UN, Vasily Nebenzia expressed the belief that the sole purpose of US convened meetings is the desire to involve the security Council in the destabilization of the situation and the change of power in Venezuela.

Russia, assured the diplomat, will continue to confront the countries “pushing the Venezuelan society into the abyss of bloody internecine strife”.

Moreover, he shared a number of specific steps that would help to pull Venezuela out of the abyss. First of all, it is the termination of foreign interference and “hallooing” of the opposition leaders of the country, and secondly, the peace dialogue Venezuelans with the possible intermediation of their Latin American neighbors. Out of the economic crisis Caracas would cancel entered against the country’s discriminatory economic measures, said.

Nebesa warned the Security Council that in the event of further acquiescence to U.S. action “tomorrow on the site of Venezuela can be any Latin American country.”

The instigators of the meeting

U.S. Secretary of state Michael Pompeo personally attend the meeting, according to the state Department, hoping to convince the UN security Council to adopt a statement recognizing the shift of power in Venezuela, where acting President declared himself leader of the opposition Huang Guido. However, in terms of the divergence of views of the members of the security Council the initiative of the United States can hardly be called otherwise than a farce.

Most likely, this proposal had Pompeo only to once again accuse Russia and China in blocking American initiatives. Although, as noted at the meeting, nebesa, blocked, were, on the contrary, Russia’s constructive proposals.

The main question that tormented and diplomats, and journalists — whether real scenario in which the United States will carry out a US military intervention in the situation in Venezuela, — Pompeo and left unanswered.

“I’m not going to speculate or make assumptions. I only know that we are determined to support the Venezuelan people, so he ultimately had democratic institutions, which deserve,” he said responding to a question from the media.

He expressed the hope that “the international community will support the people of Venezuela and the transitional government headed by Juan Guido” and hinted that waiting for the UN develop some resolutions on Venezuela, but had not explained what, in his opinion, should contain these documents.