The second newest destroyer,”invisible”, the US Navy commissioned

WASHINGTON, January 27. /TASS/. The second newest destroyer, “invisible” USS Michael Monsoor class Zumwalt (DDG-1001) introduced in Saturday in order. This was reported by the press service of the command of the Pacific fleet of the U.S. Navy. 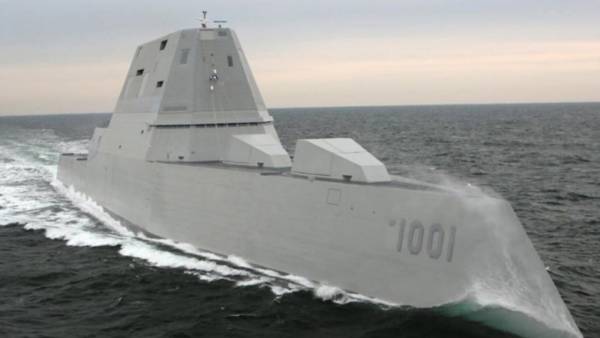 According to her, the ceremony of the introduction into operation of the destroyer was in the port of registry of the ship San Diego (California). The commander appointed captain Scott Smith, in which submission there will be a crew of 148 officers and sailors.

“The ship will provide independent presence of the force at the cutting edge and deterrence for decades, and I am confident that the team will steer the ship with skill level, courage and strength necessary to overcome any problems”, — said the Secretary of the Navy Richard Spencer.

Sally Monsoor, #DDG1001”s sponsor and mother of the ship’s namesake, orders #USSMichaelMonsoor manned and brought to life during its commissioning ceremony in #SanDiego. pic.twitter.com/8u8J0f6Nbr

The keel laying of Michael Monsoor was held in may 2013 at the shipyard of Bath Iron Works in bath (Maine). On the water the ship was launched in 2016 and handed over to the Navy in April 2018 for final testing and rearmament.

It is expected that the Pentagon will have three such destroyers at its disposal. First he gave the name of the Zumwalt — was founded in 2010 and launched in October 2013, transferred to the us Navy in may of 2016 and put into operation in October of the same year. Third — Lyndon B. Johnson — was laid in January 2017. It is expected that the Navy will get it in 2020.