In Serbia, the participants of the protests accused Vucic of usurpation of power

BELGRADE, January 26 — RIA Novosti. The participants of the mass protests in Serbia accused the President Aleksandar Vucic in the usurpation of power and called on him to voluntarily resign, the correspondent of RIA Novosti. 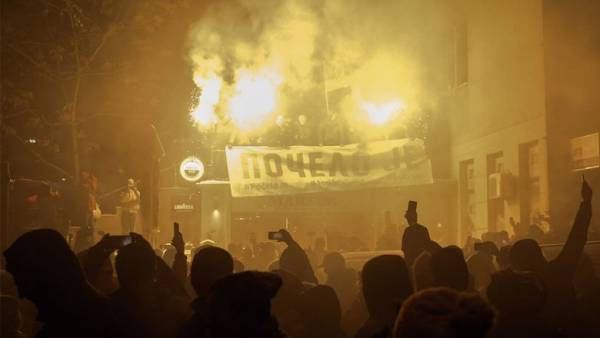 Protests in Serbia are held weekly since the beginning of December. The reason for the beginning of the protests was the attack on the leader of the opposition party “:” Borislav Stefanovic and his two companions in the town of Krusevac on 23 November, during which Stefanovic has broken down. The interior Ministry then announced the arrest of the suspects, but the opposition accused the authorities in cases of political violence.

After the rally in Belgrade on 8 December the organizers were angered by the reports of the state media about its small size. The slogan of the meeting was the phrase “Let’s count”.

Another slogan — “One of 5 million” — came after a review of the President, who said he will not meet the demands of the demonstrators, “even if they collected 5 million.”

On Saturday the action began, as the previous one, on the square in front of the philosophical faculty of Belgrade University in the city centre. Despite the snow and cold, there gathered several thousand people.

“I call on all professionals in all agencies so that they are not allowed to abuse ourselves of this power and personally to Alexander Vucic. And so they do not do anything that does not comply with the law and rules… Every illegal indication and prescription should be rejected. To defend the profession and the law of the usurper” — appealed to the demonstrators, a former Supreme court judge Zoran Ivosevic.

He called on all professional associations of teachers, scientific workers, medical workers, journalists, lawyers, economists, engineers, and cultural leaders “not to remain silent”. “Only citizens and opposition parties can work together to achieve the goal. And the most significant, important and the only objective is to make Aleksandar Vučić to resign. Or if this the reasonable way, which we offer, he will not accept to change it,” said Ivosevic under the approving roar of the crowd. Lecturer, Department of political science Department of Cupich added, “Vucic took in their hands the legislative and Executive power and conducts in Serbia despotism.”