Tymoshenko has responded to criticism of Poroshenko eating yogurt

The candidate in presidents of Ukraine and the party leader “Batkivshchyna” Yulia Tymoshenko ignored the speech of the acting leader of the country Petro Poroshenko. It is stated in the story channel “TSN Ukraine”. 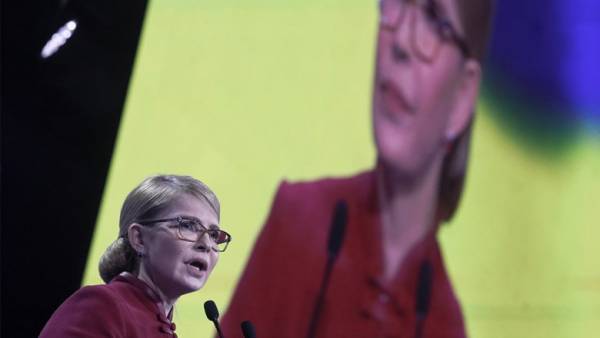 The incident occurred during a “Ukrainian Breakfast” at the world economic forum in Davos, Switzerland on January 24. According to TV channel, Tymoshenko was eating yogurt during the President’s speech and did not applaud him at the end of the speech. Poroshenko did not listen to the Minister of defence of Ukraine Anatoly Gritsenko, who read something in the smartphone.

It is noted that the Ukrainian leader has criticized a campaign promise Tymoshenko about lowering gas prices and called populist policy.

In response, during his speech, the leader of “Batkivshchyna” reminded Poroshenko of unfulfilled election promises.

Regular elections of the President of Ukraine on 31 March 2019. According to the survey conducted by the Sociological center named after Mykhailo Drahomanov published January 22, Tymoshenko ranked the first place in ranking possible candidates, ahead of incumbent President Petro Poroshenko.

The leader of “Batkivshchyna” is ready to vote for 17.4 per cent of the electorate (those ready to take part in the elections), while the current President would support 17.1 percent of respondents who intend to vote. The final list of candidates for the post of President of Ukraine must be declared before 9 Feb.