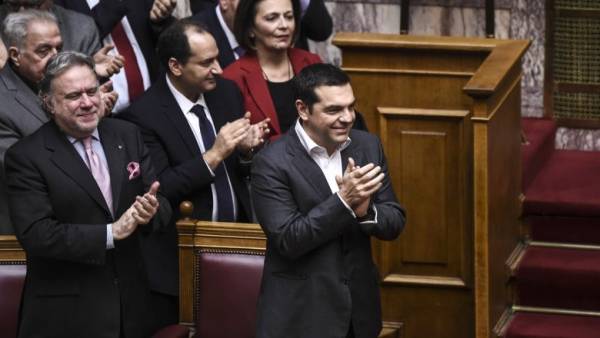 The Greek Parliament approved the agreement in Athens with Skopje about the renaming of the former Yugoslav Republic of Macedonia to the Republic of North Macedonia. This is evidenced by the results of the vote held on Friday in the main legislative body of the country at the conclusion of the three-day debate.

For the approval of the agreement voted by 153 deputies, a 300-seat Parliament, 146 opposed, one abstained.

Under the regulations, for ratification of the agreement was enough simple majority of votes of the deputies present in the room, however, Prime Minister Alexis Tsipras has set a target to ratify the document by at least 151 votes in the unicameral main legislative body.

Officially, the deputies voted for the draft law of the Ministry of foreign Affairs of Greece under the title “Ratification of the Final agreement on the settlement of disputes, which are described in the resolutions of the UN Security Council 817 (1993) and 845 (1993), the Termination of the Interim agreement of 1995 and the Establishment of strategic partnership between the Parties.” His approval meant the ratification of the agreement on the new honeybrowne of the Republic of Macedonia. The government managed to get 153 votes in favor of ratification of the document at the expense of the 145 votes of the deputies of the ruling party coalition of the radical left forces (SYRIZA) and eight opposition and independent MPs.

The approval of the agreement was preceded by two days of stormy debates in the standing Committee on national defence and foreign Affairs of the Hellenic Parliament. Then it was three days discussed in plenary. Representatives of the ruling party SYRIZA argued that this agreement is the only correct and possible in the circumstances, but the opposition parties called the deal “a betrayal of the interests of the Greeks” and the transfer of the neighboring country, official right to use in its name the word “Macedonia”, belonging exclusively to Greek history and culture.

Speaking in the debate, the Prime Minister of Greece Alexis Tsipras expressed the opinion that the day of the ratification of the agreement will be recorded in history as the beginning of a new era in the Balkans — modern, European, democratic and peaceful. According to him, with the help of the agreement with Skopje “Greece takes back what belongs to it — the story, the characters, the traditions and heritage of Greek Macedonia” and “Northern Macedonia becomes a friend and allied country.” The Prime Minister stressed that Greece does not transmit the neighboring country the right to call your language Macedonian, as “it was not the Macedonian language in order to pass, [Greek philosopher] Aristotle taught [the king of Macedonia and great General] Alexander the great in Greek and not in Macedonian language.”

We did not have and the Macedonian nationality, which we allegedly share, as the Macedonians who live in Northern Greece are Greeks.Alexis Tsipras Prime Minister of Greece