Why Joan Guido the most unexpected and the most obvious opponent of Nicolas Maduro. 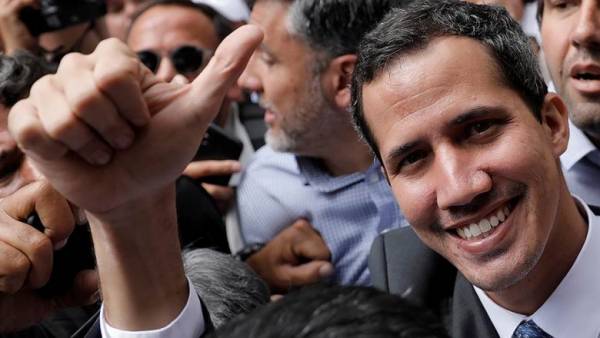 Juan Guido, declared himself interim President of Venezuela, was not supposed to be the main opponent of the regime, or even a more or less well-known opposition figure. That’s what he is, is a merit of the regime itself.

The background of Juan, Guido and Nicolas Maduro recalls the biblical story of David and Goliath. It’s not only about the different weight categories of opponents, but also about the circumstances in which the two forces met. Goliath caught up with such fear in enemies that want to fight him (except David) left. That nicolás Maduro put so much effort on the defeat of the opposition that when opponents of the regime were seeking a new leader, no one except Juan, Guide not found. As in the story of David, the youth and relative obscurity of Mr. Guido does not mean that its a losing. Unlike the older and more experienced colleagues, a man who calls himself the interim President of Venezuela, is clearly not inclined to compromise.

He’s more of a professional revolutionary than a professional politician. Nothing but struggle against the regime of Chavez—Maduro, he is in his life and was not engaged.Boy from a good single-parent families

In 1992, when Hugo Chavez first began outside the military unit in which he served (he organized a military coup, for which he went to jail), Juan, Guido was eight years old. His family proudly identified themselves as middle class. Father is a civil aviation pilot and his mother a teacher.

In any Latin American country with great respect for the military. Juan, no doubt, was proud that both his grandfathers were military.

One served in the national guard, and the other in the Navy.

About his family and childhood little is known: until mid-January press didn’t care about Juan, Guido, and when this fact appeared, the reporters had no childhood, interim President of Venezuela by the national Parliament. We only know that father Juan was married the second time, and in the early 2000s left Venezuela in the first wave of emigration, and moved to Spain. Juan by that time graduated from high school and enrolled in Catholic University andrés Bello, where along with his studies, engaged in revolutionary activities.

It came to the time to power of Hugo Chavez, Guido was personal.

In 1999, Vargas state, where he was born and lived Juan, became a place of terrible natural disasters. Landslides, mudflows and floods caused by unprecedented rains, have caused almost complete destruction of the infrastructure of the hometown of Juan — La and throughout the state.

Worse, more than 30 thousand people died and hundreds of thousands of families remained without a roof over your head. Among the hundreds of thousands who lost their homes, was the family of Guido. Despite the scale of the disaster, Hugo Chavez refused to accept help from the United States. According to friends of Juan, the authorities ‘ response to the tragedy in Vargas, one of the worst in the history of the country, pushed him to the political struggle. He was 16 years old.

Together with colleagues at the University, he participated in demonstrations, protests, organizing student opposition groups. At this time he became acquainted with the main face of the Venezuelan opposition Leopoldo Lopez. When Lopez began to unite many opposition factions into a single organization, who eventually became the political party “people’s will”, Guido was already next to him. He was involved in the creation of the youth wing of the organization.