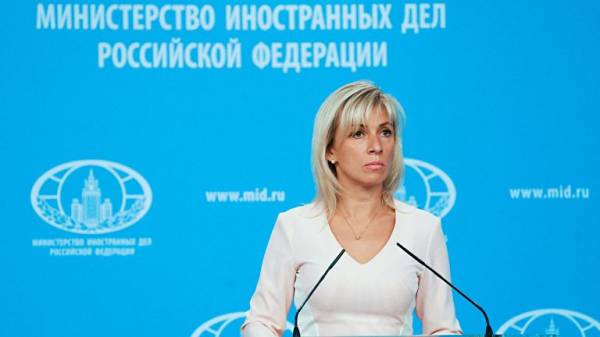 “I didn’t know that Anatoly Borisovich looks Dom-2”, — he wrote in Facebook.

Responding to a comment of one of the users of the social network, Zakharov noted that not monitors the project and does not know who today leads the show.

I thought he only Sobchak was watching, and he, you see, Buzova reached. Darkness, of course. Survived. The head of state Corporation.Maria Saharanafrican the representative of the Russian foreign Ministry

Previously, Chubais suggested that “promote” Olga Buzova in the Ministry of foreign Affairs in the place of Maria Zakharova. In his opinion, the presenter will accustom on a new post and “will be able to conduct these briefings with journalists.” Zakharova’s Chubais advised to get in “the House-2”.

“It would be brilliant for her new challenge, and there I think people will be shocked,” — said the head of “RUSNANO”.

Earlier Chubais and Zakharov joined the debate because of the remarks of the head of state Corporation on the state of the economy in the country and the work of Chubais in the government. Speaking at the Gaidar forum, the head of “RUSNANO” called the Russians poor people. After some time the representative the Ministry of foreign Affairs published a post in which he stated that on the causes of the poverty of Russian citizens should know the “man for decades who was a member of the government, why the country has developed economic situation”. In response Chubais said that during his work in economic indicators in Russia improved. According to Zakharov, this period in the history of the country she recalls, “with a shiver”.

In the end, Chubais acknowledged the victory Zakharova in the dispute, and the diplomat had accepted his “surrender”.