The head of the Ukrainian Orthodox Church-Kyivan Patriarchate (UOC-KP) Filaret has said that the Tomos of autocephaly was not issued by the newly established Orthodox Church in Ukraine (PCU), namely its structure. The transcript of the Metropolitan and the clergy of the UOC-KP published on the website of the “Union of Orthodox journalists.” 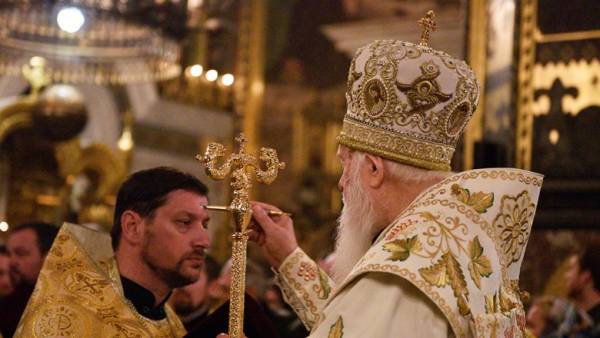 “What the new Church? The Church exists for more than 25 years. And if it were not for this Church-Kyiv Patriarchate, whom Tomos to give these two Moscow priests without parishes? It is clear that given a Tomos Kyiv Patriarchate,” says the record Filaret.

In addition, Metropolitan has also objected to the names of the ptsu.

Ecumenical Patriarch Bartholomew signed the Tomos of autocephaly of the DNC on 5 January, and the next day handed it to the head of the DNC to Metropolitan Epiphanius, in the Cathedral of St. George in Istanbul. 15 Dec 2018 in Kiev took place the unification Council, which proclaimed the establishment of the PCU and chose her to lead the Epiphany. The cleric referred to as close to Filaret, the leader established in the 1990-ies of the UOC-KP. From the canonical Ukrainian Orthodox Church of the Moscow Patriarchate on the Church came just two people.