Moscow. 25 Jan. INTERFAX.RU Rescuers acknowledged that there is no chance to find the missing crew members alive. 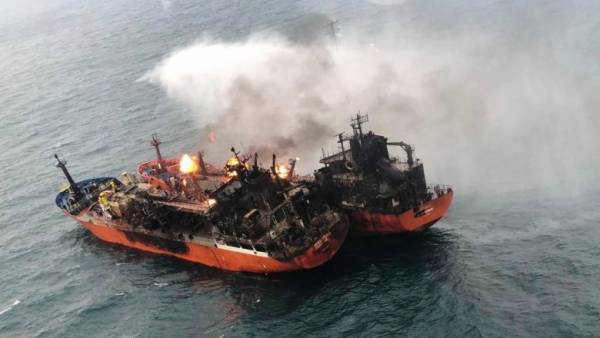 Hope to find surviving sailors from the two tankers that burn in the Black sea anymore, the search operation is stopped, said “Interfax” the press service of the Rosmorrechflot.

“The search operation, which lasted from January 21 to 25, completed in the absence of a reasonable hope of finding someone alive,” — said the Agency interlocutor.

Two vessels with liquefied gas — “Kandy” and “Maestro” — caught fire on January 21 in the neutral waters of the Black sea. Tankers under the flag of Tanzania was at anchor 15 nautical miles South of the Crimean Cape takil.

The fire, according to preliminary data, has occurred during transfer of fuel from port to starboard.

Sources “Interfax” think tankers have worked with fuel on the “gray schemes” and may have violated the safety regulations.

Crew members — citizens of India and Turkey. The incident resulted in ten of the 32 sailors were killed, ten were missing, 12 rescued. The foreign Ministers of the two States confirmed the death of its citizens.

Tankers Venice (now called Candy) and Maestro in November 2018 was mentioned in the information of the U.S. Treasury, warning about the risk of us sanctions. Washington argued that in 2016 the court engaged in the supply of fuel to Syria.