MOSCOW, 24 Jan — RIA Novosti. The state Duma adopted in the third reading a law allowing the attorney General to request the Central Bank to continue to receive information from foreign banks on deposits of Russians who are forbidden to have them. 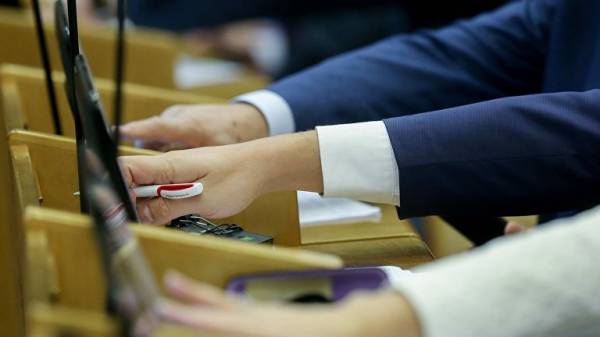 Earlier, the relevant draft to the lower house of Parliament made the President of the Russian Federation Vladimir Putin.

Now the legislation provides for a ban for high-ranking officials, civil servants, MPs and senators to open and have accounts and deposits in foreign banks to own and use foreign financial instruments, including securities of foreign companies.

a Blacklist of corrupt 2018: for lack of confidence dismissed 662 people

The General Prosecutor’s office, if necessary, may send a request to the Central Bank of the Russian Federation, which refers to the Central Bank and (or) another Supervisory authority of a foreign state, whose functions include banking supervision, or to a foreign financial market regulator with a request to provide information about the presence of persons in accordance with this Federal law it is prohibited to open and have accounts (deposits), store cash and values in foreign banks located outside the territory of the Russian Federation, stated in the draft law.

In the explanatory Memorandum to the bill notes that the project is proposed to entrust the General Prosecutor’s office of functions of the authorized body for cooperation with competent authorities of foreign States in carrying out appropriate checks. In the case of the impossibility of obtaining relevant information, the GP can send a request to the Central Bank of Russia. He, in turn, refers to the Central Bank or another Supervisory authority of a foreign state with a request for information.