The former President refused to participate in the process. 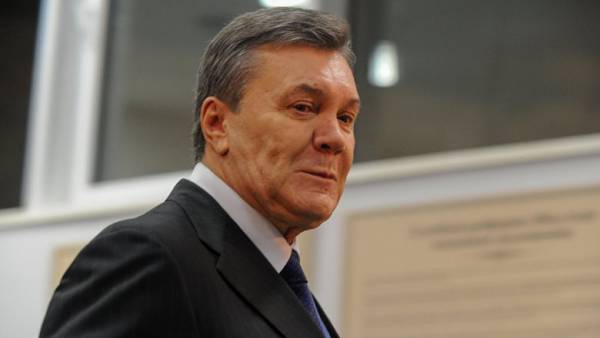 Obolonskyi court in Kiev convicted the former President of Ukraine Viktor Yanukovych on charges of treason. This was announced by the judge Vladislav Devyatko, transfers “112 Ukraine”. Wine Yanukovych under part 1 of article 111 (high treason) and part 2 of article 437 (planning, preparation, initiation and waging aggressive war) of the Criminal code of Ukraine “is proven relevant and admissible evidence,” the judge declared.

In particular, the court found that on March 1, 2014 Yanukovych made up and sent an appeal to President of Russia Vladimir Putin with the request to send troops to Ukraine.

The court began hearing the case in June 2017. there have been a Total of 89 meetings. The prosecution asked for Yanukovych’s sentence of 15 years imprisonment.

Yanukovych has refused to admit guilt and participate in the process. He stated that he has not asked Russia to send troops to Ukraine.

In March 2018, he presented the letter, addressed to Putin in 2014, stressing that it is not about the introduction of troops and police to peacekeeping missions. He also noted that “a similar letter” was sent to Germany, France and Poland.

He had to speak with the last word in court, but, according to the lawyer, received an injury of the spine and legs. The court allowed him to speak via video link at the meeting on 5 December 2018, being in a hospital bed. The defense has asked to postpone this meeting, but the court refused, explaining it by the fact that the medical certificate does not indicate that the ex-President, “injured the head or the organs of speech” (quoted according to “Gromadska”).

Yanukovych left Ukraine in February 2014 after the riots and shooting of protesters by snipers on the Maidan Nezalezhnosti in Central Kiev. In the same month, the Verkhovna Rada approved the decree by which he withdrew from the exercise of the constitutional powers of the President.