Pompeo: the United States and Russia is not doomed to be adversaries

Russia and the United States should not be condemned to the opposition, said during the teleconference at the world economic forum in Davos, U.S. Secretary of state Michael Pompeo. 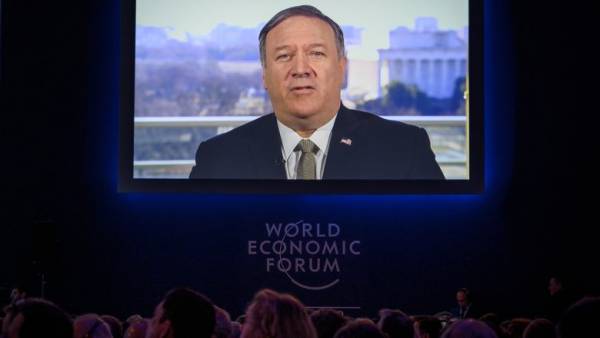 In doing so, it shifted the decision on the resumption of bilateral relations on Russia, noting the need to “change its behavior” and “to return to the right course of action”.

“If they do, I am confident that our two countries can prosper and develop side by side,” said U.S. Secretary of state.

In Davos, Switzerland opened the 49th session of the annual world economic forum. The Russian delegation is headed by Minister of economic development Maxim Oreshkin. The forum also planned to visit the head of VTB Andrey Kostin and businessman Viktor Vekselberg.

Recall the relationship between the U.S. and Russia deteriorated after the incident in the Kerch Strait from the Ukrainian ships. Donald trump has canceled a meeting with Vladimir Putin, which was to be held on December 1 in the framework of the G20 summit.

On the 49th session of the WEF in the publication “Kommersant” “Davos light.”