PACE decided to separate the sanctions from the people

The “Magnitsky act”, called to spread to all of Europe. 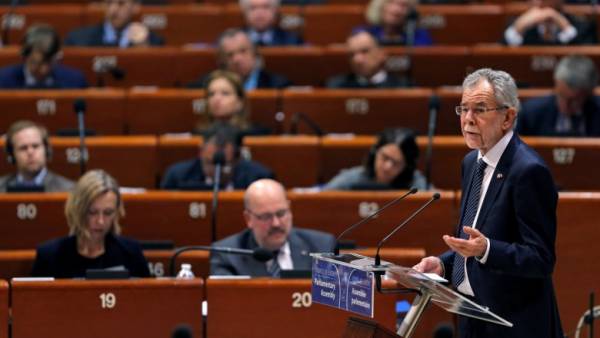 The parliamentary Assembly of the Council of Europe (PACE) adopted a resolution calling on the parliaments of all member countries to create conditions for the development of laws like “Magnitsky act”. Such a document would deny visas and freeze the accounts of people who “are responsible for serious violations of human rights”. The resolution also aims to demonstrate that the PACE “do not trust the Russian justice”. Over the course of the discussion in Strasbourg was watched by the correspondent “” Ekaterina Mareeva.

Resolution “Sergei Magnitsky and similar cases — fight against impunity through targeted sanctions” made a member of the British labour party Donald Anderson.

Of the 318 members of PACE in the vote was attended by 104, 95 voted in favor, three against and six abstained.

The document calls on the parliaments of all member countries of the Council of Europe to create conditions for the development of laws like “Magnitsky act” adopted in the U.S. in 2012. Explained that such documents “would allow governments to impose targeted sanctions against individuals who are responsible for serious violations of human rights”. In particular, we are talking about bans on issuing visas and freezing accounts of people that fall under the restrictions.

Targeted sanctions in the resolution are called to be more effective than economic, as the latter “harm to ordinary people and almost never put it to the ruling elites, who are responsible for the actions that led to the sanctions.” “Very often the disregard of human rights associated with personal enrichment, explained during the debate the Deputy of the party “European Georgia” Giorgi Kandelaki. — And the money the perpetrators of violations of human rights bring to the West, to ensure the safety of their funds. These laws must curb impunity withdrawal”.

To impose restrictions is offered not only against those involved in the death of a lawyer Fund Hermitage Capital Sergei Magnitsky, and against all who “have seriously violated human rights, but goes unpunished in their country.”

So, members of the Ukrainian delegation to PACE said that the need to impose sanctions on all those involved in the detention of Ukrainian Director Oleg Sentsov (accused Russia of terrorism), and the first in this list to make Russian President Vladimir Putin.

The resolution, however, contains a note that each country is “itself should determine the most appropriate way of addressing impunity” in the field of human rights.

We will remind, Sergey Magnitsky, accused of “tax evasion in especially large size”, died in a hospital jail “sailor’s silence” in 2009: the doctors, he was brought with complaint of acute abdominal pain. Soon after his death, the media got the diary of the lawyer with copies of more than 50 complaints about poor conditions of detention and lack of medical care. Western countries argue that Sergei Magnitsky was killed, and his prosecution explain the fact that he exposed corruption schemes that were used by the Russian officials and law enforcement officers.