Tymoshenko called the main task for the new President of Ukraine

KYIV, 22 Jan — RIA Novosti. The leader of the Ukrainian party “Batkivshchyna” Yulia Tymoshenko believes that the first priority of the new President of Ukraine should be a return to the conditions of the Budapest Memorandum on security assurances in connection with Ukraine’s accession to the Treaty on the nonproliferation of nuclear weapons. 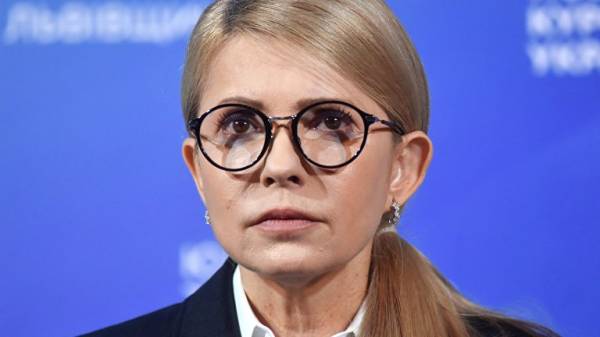 In Kiev on Tuesday began the work of 14-th Congress of the party “Batkivshchyna”. The Congress has registered 174 delegates from different areas. It is expected that the party will nominate its leader Tymoshenko, candidate for President of Ukraine.

“International guarantees must be met, otherwise international law in the world will just be discredited. A return to the conditions of Budapest and the protection of Ukraine from Russia, the aggressor country is a priority task of the new President,” said Tymoshenko on Tuesday during the party Congress.

Tymoshenko also said that insists on strengthening military-technical assistance, which is “desperately needed.”

After the collapse of the Soviet Union, Ukraine inherited a substantial nuclear Arsenal. However, in 1994, Ukraine, Russia, USA and Britain signed the Budapest Memorandum, which served as an international agreement on security assurances in connection with Ukraine’s accession to the Treaty on the nonproliferation of nuclear weapons.

In accordance with the Treaty, the nuclear Arsenal on the territory of Ukraine has been eliminated, and the nuclear powers undertook to guarantee the safety of Kiev.

The Russian foreign Minister Sergei Lavrov said that Russia fully complied with its obligations under the Budapest Memorandum.

Presidential elections will be held in Ukraine on 31 March. The electoral campaign for the presidential election officially kicked off in Ukraine on 31 December. On the same day began the nomination of candidates for the post of President and submission of documents to the CEC for registration. The leader of presidential rating, according to opinion polls, over the past months remains Tymoshenko, who has already declared intention to participate in elections.