Germany and France agreed to defend itself without NATO

German Chancellor Angela Merkel and President of France Emmanuel macron has signed a new agreement on cooperation and integration between the two countries. Reported by the Associated Press. 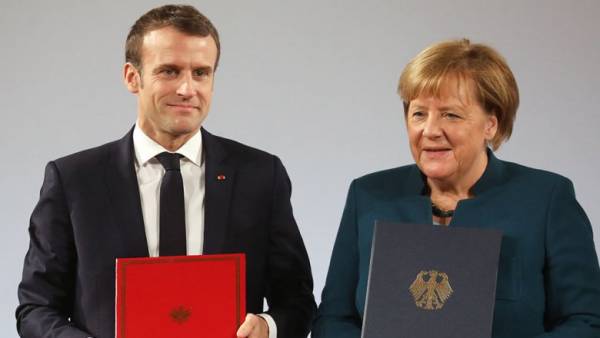 During the ceremony, Merkel warned about the rise of nationalism in Europe. “Populism and nationalism intensified in all our countries,” she said to the assembled officials from all over Europe. According to her, international cooperation is going through a difficult period, and that therefore it was necessary to sign the agreement, declaring the responsibility of France and Germany, including in the EU.

It was supported by macron. He noted the “growing discontent” in the European societies and pointed to the pressure from the outside.

As transfers RIA Novosti, the Chancellor also noted that the countries will provide each other support, including military, in case of an armed attack.

Merkel added that Germany and France will continue military cooperation. “We are committed to develop a common military culture, and General industry of defence, a common line on arms export. Thus we want to contribute to the formation of European army,” she said.

The document was signed in the West German city of Aachen, exactly 56 years after the Elysee Treaty of 1963, which contributed to the establishment of relations between France and Germany after the Second world war. The new agreement is aimed at expanding cross-border cooperation and better coordination between countries in resolving international problems, including the issues of climate change and the fight against terrorism.

Germany and France are part of NATO. In the fifth article of the NATO Treaty refers to the need for the collective defence of member countries of the Alliance: an armed attack on one country is seen as an attack on the entire block.