Fire on ships in the Black sea. The main thing

The fire occurred on two vessels in the Kerch Strait. According to the latest data, the victims of the incident were 10 people, the fate of ten remains unknown. TASS has collected all that is known about this incident at the moment. 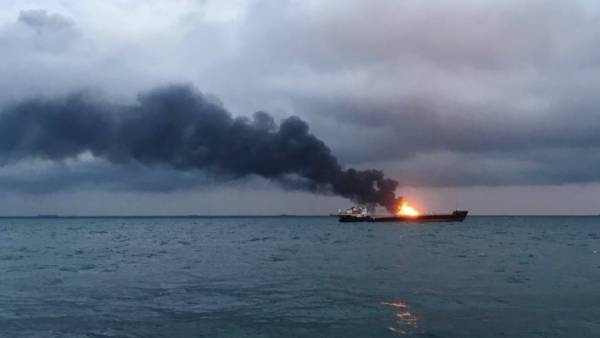 On vessels of “Maestro” and “Kandy” was area of the Strait of Kerch under the flag of Tanzania was set on fire. According to preliminary data, voiced in the press service of Rosmorrechflot, on one of the ships explosion.

In the Novorossiysk marine rescue coordination center reported that the incident occurred outside the territorial waters of Russia, 10 people were killed and another 10 reported missing, 12 people were rescued.

The investigative Committee of Russia opened a criminal case on the fact of death of the members of the crews of two ships.

Who was on Board

Ships continue the search. According to the 10 missing people, found 10 dead bodies, 12 people saved. The fire on the ships continues, and it will not be extinguished until all of the gas will not burn out.the representative of the rescue center

The Indian Embassy in Moscow reported that is in contact with EMERCOM of Russia on the situation with the fire, as the courts were citizens of this country.

According to preliminary data, the incident occurred during transshipment of fuel from one vessel to another.

During the download an error has occurred.How’s the search

In the Novorossiysk marine rescue coordination center reported that the rescue team members involved about 10 vehicles and three spacagna. In addition, to assist in the area of the accident sent two ships of the black sea fleet.

“Left the ship “Smolny” in the area of emergency from Kerch. This vessel is serious intended, including for carrying out of rescue, it belongs to one of the Kerch private companies”, — said the Deputy head of the administration of Kerch Dilyaver Mangazeev.