A tribute to tradition: how Shinzo Abe will fulfill his oath to his father

Will there be enough Shinzo Abe’s courage to return the Kuril Islands. 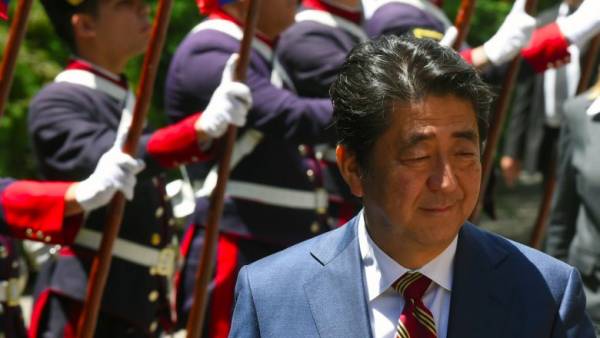 On 21 January arrived in Moscow Prime Minister of Japan Shinzo Abe to meet with Russian President Vladimir Putin. For an extremely long period of time the 64-year-old politician showed himself a worthy leader and, as you might expect, got fans and opponents at home. “Газета.Ru” — about what Abe love and hate in Japan.

Prime Minister Shinzo Abe was born in a famous family of politicians and is at the head of the Japanese government for the fourth time. For the first time Abe headed the Cabinet of Ministers in 2006, when he was 52 years old. So Abe went down in history of the country not only as a hereditary politician, the longest tenure since the end of world war II, but as the youngest Prime Minister of Japan.

Shinzo Abe, despite the typical Japanese restraint, known for their straightforwardness, which can demonstrate in the disputed points.

For example, in 2017, the Prime Minister pointedly tasted mined near Fukushima seafood to convince journalists in the safety of that food. In addition, the politician urged to get rid of limits on imports of seafood from the Prefecture, where earlier accident.

Another thing which is so proud of himself and the Japanese, Shinzo Abe — a tradition. Old customs are carefully preserved and transmitted from generation to generation. For example, wherever you might be, the Japanese always organize a warm welcome and finally, thanks for the visit. Also don’t be surprised if in a restaurant or Museum, you will be asked to remove your shoes and leave at the door is also a long-standing Japanese tradition.

In early January 2019, it became known that the Prime Minister visited the town of Nagato in Yamaguchi Prefecture where he was born, accompanied by his wife Aki Abe. The purpose of the visit was to visit the place where his father is buried. As later told reporters Abe, on the grave of his father, he vowed to “do everything possible” to advance negotiations with Russia regarding the Kuril Islands “and dot”. The Japanese leader said that this year will be “a turning point in history.”

Probably, the oath Abe belongs to the category of those promises, the violation of which would be tantamount to betrayal of the memory of their ancestors.

The most popular applications include Japanese politics and its promise “to let the women Shine” in business and public life. It is not surprising that when in October 2018, the year in the composition of his government included only one woman, Abe was accused of sexism and inability to keep his word.

In response, Abe noticed that the candidacy of member of the house of councilors of Japan, Satsuki Katayama was accepted because of her zeal, she is able to “replace two or three women”. Review justified, since Katayama combines the work of three Ministers: of regional development, gender equality and women’s rights.

The head of the Japanese government noted: “We must recognize that the ratio of women among Ministers is low compared to other countries, but Japan is just beginning to create a society where women could be more active. I think we will foster those people who can become Ministers.”