Papuans for centuries fought with bows and spears. The machines turned their life into a nightmare

The indigenous tribes of Papua New Guinea, for centuries have lived, traded and fought with each other, subject to ancient customs. When they had conflicts, they solved them, picking up bows and spears. It was not until the arrival of the colonialists and continued after their departure and independence. 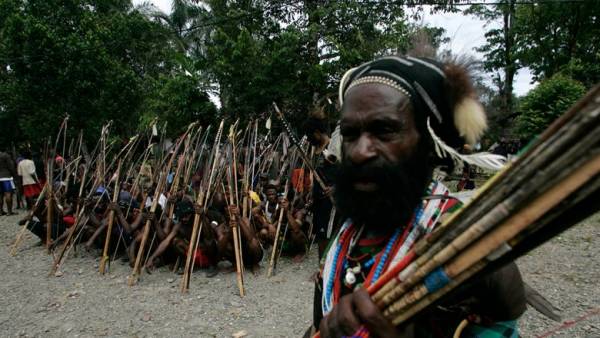 But in recent years, in remote mountain areas of the country there was a firearm, and traditions of their ancestors has given way to an unprecedented wave of violence. Tribes exterminate each other, sparing women and children, razing to the ground entire villages. As Papuans suffer from barging in civilization and who’s to blame — to understand”.ru”.

Mountains covered with jungle, down the fog. Among the greenery from the heights seen a few dozen huts — a village called Stew. “They came at night like thieves and attacked us,” says the mustachioed older Papuan named nucky Shaft. “They came at midnight. So they managed so many people to kill and hurt — including my son,” he says, pointing at the sullen teenager in dirty clothes. “My son almost burned down that night. When he set fire to the house, he hid under the mattress and blanket, but they also lit up. He escaped only with God’s help”. The boy removes his jacket — his entire back is disfigured by burns.

According to the precepts of their ancestors

Residents of Papua New Guinea the entire twentieth century has resolved the conflict as their ancestors did. Men conflicting tribes armed with bows, spears, hatchets and met at the appointed place. Side some time showered each other with insults, then began the battle. Often the cause of enmity was rather small dispute, therefore after the death of one of the soldiers the battle has to end. Sometimes enough, and several wounds — the scars Papuans proudly wore the rest of my life.

Papuans continued to live according to tribal laws and after independence, Papua New Guinea in 1975. The traditions of their ancestors helped to resolve issues in the usual way and replacing the state institutions. However, the absence of these institutions (in most of the country) — came out sideways when grown at twice the population is no longer enough resources, and in remote rural areas there was a firearm.

The red Cross began to sound the alarm in the beginning of zero: a weapon in the hands of the villagers, abruptly changed the habitual course of life. In the early ‘ 90s in the local hospital did not arrive literally any person with gunshot wounds — after 10 years, they accounted for about one-third of all cases.

In those days, when fighting between tribes was carried out by conventional methods, one tribe could repay another a single victim simple financial compensation — cattle or other useful resources.

Now, when in the hands of the Papuans were small arms, almost every encounter ends in loss of life. And the blood of the tribes invariably pay each other more and more blood.

The older members of the tribes, nostalgic for bygone traditions, explain Western reporters and researchers: the weapon was in the hands of young people, who spit on the values and words of the elders. Young Papuans are not considered to ancient customs, not able to take into account the destructive power of automatic rifles and a lack of values leads them to unprecedented cruelty. Warriors in direct violation of all their ancestors, involving in the conflict, not only soldiers from other tribes, but their children as potential future enemies, women, elderly and sick members of the community.

the Australian aborigines have overtaken the Russians in courtesy

Competing in military power, the tribes consistently raise the stakes and increasingly demolish the village cleaned: armed groups attack unexpectedly, killing all who could not escape in time, raping of women and girls, burning of homes and crops, taking or shooting livestock. Everyone who had something to do with the warring tribe, are now considered enemies spare neither priests of any denomination, nor medical workers.

New private social group were the mercenaries are former military, police or just veterans of clan conflicts. They receive for their services, money, cattle or women and are organized and ruthlessly. For them, any conflict is just a job, and his cruelty they do not need to justify the interests of the tribe. To kill an enemy — good luck to any warrior, because they can find better weapons.

Despite the fact that in the jungles of Papua New Guinea found enough animals available to eat, none of the Papuans interviewed in 2004 by Swiss anthropologists, not called the hunting among the first three goals for the purchase of firearms. Virtually every Respondent said that the weapons he needs in order to threaten another person, to hurt or kill him.

Per capita in mountainous areas of the country have 30-50 times fewer units of firearms than in neighbouring Australia and New Zealand. But the probability that the purchased weapons will be used to kill, several times higher than in countries with higher levels of armed violence, such as Ecuador, Jamaica, Colombia or South Africa.

Among the population here are popular homemade guns and shotguns, so the Red Cross and other international organizations try to use no metal and plastic pipes in the construction of its facilities. In the struggle for the life of the local residents used all his ingenuity for the year 2018, the police confiscated dozens of pistols and revolvers, the handle of which was adapted for construction staplers.

But makeshift weapons inaccurate, unreliable and endangers not only the victim but the attacker — therefore, the main danger is not it. The main damage in the war of the tribes, and in the normal criminal — cause the people whose equipment was made in the factories of major arms companies.

Noodles instead of Kalashnikov. As China seized the former “Soviet” Africa

In the hands of the fighters to meet the American M16 rifles and police semi-automatic version of the AR-15, the Russian AK and twins from other countries, the British SLR. Popular repeating shotguns Mossberg, Winchester and Remington. Papuans use against each other hand grenades, grenade launchers, and even mortars, and when you need to impress the foremost tracer cartridges inhabitants of the whole valley resort to expensive and difficult to use large-caliber machine guns. Traditional edged weapons was replaced by durable and effective in use machetes and mobile phones and walkie-talkies to help the soldiers to coordinate actions.

It is not clear where all this wealth appeared on the black market. Local residents believe that the weapon falls in the mountainous areas of the island of Bougainville, where up to 1998 there was a civil war, or purchased across the border with Indonesia — on the tribes allegedly prepared by growing marijuana. Find out where Papuans money on firepower, it is hardly possible — but about where it comes from, is quite significant considerations.