Colombia mourns the victims of the terrorist attack in bogotá. Killed 21 people

For the first time in its history, this country was faced with the explosion committed by a suicide bomber. 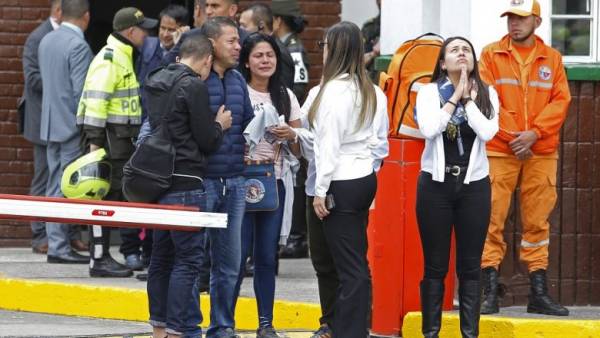 BOGOTÁ, January 18. /TASS/. At least 21 people were killed, 87 injured in the terrorist attack that took place Thursday morning in the capital of Colombia, Bogota, when a car filled with explosives crashed into the wall of the building of the national police Academy. For the first time in its history, this country was faced with the explosion committed by a suicide bomber.

79 of the 87 victims are still in hospitals. Most of them Colombians, however, among the wounded there are also Panamanians and Ecuadorians who studied in the Academy. President Ivan Duque announced three-day mourning.Morning blast

On Thursday morning at the police Academy General Santander, which is located in the South of Bogota, was held the solemn ceremony of promotion of officers of the Colombian police and the adoption in its ranks cadets.

A few minutes after the end of the event to the backup checkpoint approached the Nissan SUV. After the dog signaled that the car there is something suspicious, the driver pressed the gas pedal and drove into the school grounds. The explosion occurred at 09:30 (17:30 GMT) when a vehicle crashed into one of the buildings of the Academy.

According to authorities, the car was carrying 80 kilograms of explosives. The explosion was so strong that several nearby buildings shattered Windows.

The driver and several officers of the Academy were killed on the spot.

The identity of the terrorist is established

Law enforcement agencies have identified the executor of the explosion. They found 56-year-old Colombian Jose Aldemar Rojas Rodriguez. Now the authorities find out who ordered the attack was a suicide bomber linked to insurgent groups in Colombian territory.