In Japan there is a hotel where only robots work. 4 years later, half had to lay off

The robots could not cope with their responsibilities — not able to do copies of passports and Wake the guests with the phrase “can I help you?”, when they snored. 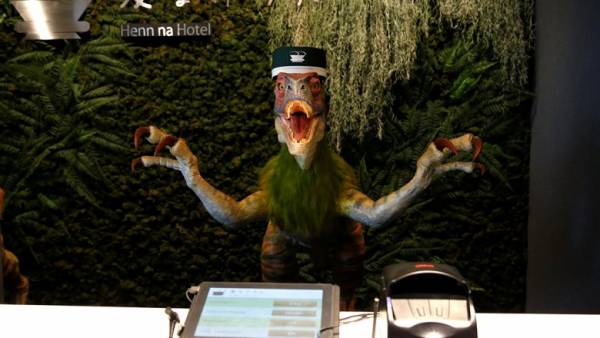 The hotel Henn-na in Japan, where guests were served 243 of the robot, decided to cut half of the “staff” and replaced with people, writes The Wall Street Journal. Unfortunately, robots are very bad do their jobs and are constantly creating problems in the workplace. The hotel opened in 2015, and the decision about reduction of the staff manual was adopted in January 2019. Instead dismissed the robots will hire people.

It turned out that with all the high-tech robots are not simple operations: for example, mechanical dinosaurs, which served as the workers at the front Desk of the hotel do not know how to make a photocopy of passports and they constantly had to help with that. Robots-the porters were able to deliver the Luggage only 24 rooms from 100, and then if the weather was not rainy or snowy, and colliding in the hallway, they hung out in attempts to miss each other. In addition, the robot assistant, which is included with each room, Wake guests if they snored, and asked how he could help them.

While the leaders of the Henn-na do not reject the concept of the hotel with robots, though, and recognize that without people to work it until you can. In their opinion, the cause of the problem — the speed of technological obsolescence: in just 4 years of operation of the hotel the latest at the time of opening of hotel robots managed to overtake the simplest mobile apps, voice assistants smart phones.