Foreign Minister Sergei Lavrov held a big press conference at the end of 2018. The Minister answered the questions of the media about Russia’s relations with the US and NATO, the dispute over the Kuril Islands, the situation with the detention of Russians abroad, as well as the crisis in Ukraine and Syria. 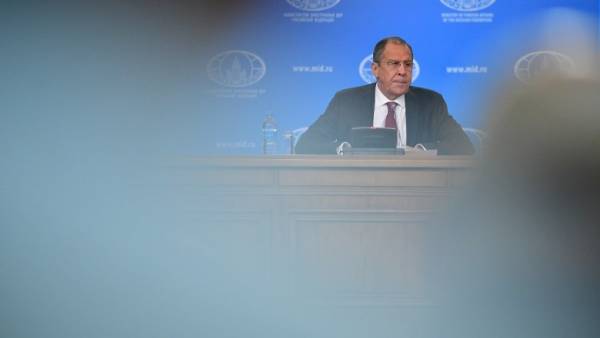 Promoted by the West “order, rule-based” implies short-term solutions to world problems and the pressure on uncooperative Nations, said the foreign Minister. He said that in 2018, the world situation remained precarious, increasing the potential for conflict. Lavrov called on Western countries to abandon attempts of unfair competition through sanctions.

The Minister has called the demands to transfer to Japan the southern Kuril Islands to contravene the country’s obligations under the UN Charter, one of the articles which says that the outcome of the Second world war intact.

According to him, Moscow and Tokyo still have a lot to do in order to become real partners in the international arena.

Lavrov pointed out the illegality of the attempts of the us Congress to prevent the President of the United States Donald Trump foreign policy.

He noted that he “just is difficult to comment on what is happening in the United States around the charges of the President of trump is that he is a Russian agent.”

The Minister noted that the investigation of spectracolor Robert Mueller about the alleged collusion between the American leader and the Russian authorities have not revealed any facts in support of this version.

Consultations in Geneva on a Treaty on the elimination of intermediate-range and shorter-range confirmed the US policy on the scrapping of the tools of strategic stability, said the foreign Minister. He stressed that Moscow is ready to continue to work for the salvation of the INF Treaty.

According to Lavrov, Russia also expects that the US does not plan to withdraw from the Treaty on measures for the further reduction and limitation of strategic offensive arms. While Moscow has questions for the American side concerning the implementation of start-3.

The Minister also expressed hope that the manner of the US to create additional tension in different parts of the world will occur in the Arctic.

About Brexit and the expansion of NATO

Moscow is ready to cooperate with Brussels and London, regardless of how complete a British exit from the EU, Lavrov said.

According to him, Russia will continue to react to the increased activity of NATO and the approach of the military infrastructure of the Alliance towards the Russian border. However, he noted that Moscow “is still interested in restoring normal relations with the United States and the European Union on the principles of equality and mutual consideration of interests.”

Lavrov noted that Russia can not agree with the accession of Bosnia and Herzegovina to NATO. He believes that the rules that are promoted in the Balkans, “a rather dangerous obsession and reflect the to quickly drive” all Balkan countries in NATO.