Moscow. 14 Jan. INTERFAX.RU — Russian foreign Minister Sergei Lavrov met with his Japanese counterpart Taro Kono on Monday in Moscow started the negotiations on the conclusion of a peace Treaty between the two countries. 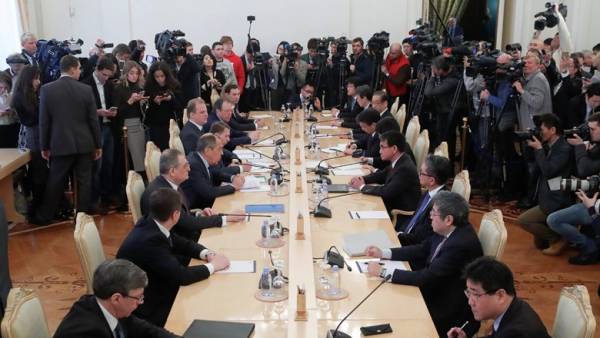 “In accordance with the instructions of our leaders on the results of summits in Singapore in November and in Buenos Aires in December last year, we begin negotiations today over the problem of the peace Treaty,” Lavrov said, opening the meeting.

The Russian Minister noted that “in recent years Russian-Japanese relations gained a good momentum and are developing a number of fronts”.

“Not without the challenges of external factors, but still developing economic and trade cooperation, including on the basis of Russian priority investment list and terms of cooperation, Mr Abe in eight directions”, — said Lavrov.

Russian President Vladimir Putin in November, has held a meeting with the Prime Minister of Japan Shinzo Abe during his visit to Singapore. As told the Russian leader on 15 November, Japan would be ready to return to the discussion of the problem on the basis of the 1956 Declaration, but also reminded that the Declaration is not so clear.

“The more that Japan itself from the implementation of these agreements refused”, — stated Putin.

Subsequently, the Japanese Asahi Shimbun reported that Abe, during talks with Russian President promised in case of transfer of the Russian side part of the Kuril Islands, that there will not be military base of the United States.