The author of the amendment pointed to the progressive approach of the Supreme court, which looks at the practice of the ECHR. 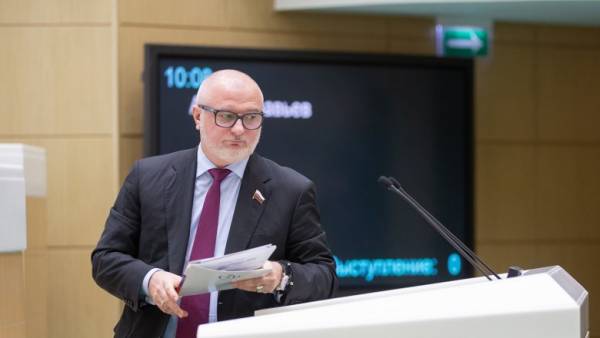 A member of the Federation Council Andrei Klishas said during discussion of draft laws on punishment for publishing fake news in the media and insult the power of the Internet, there is always the risk of abuse of articles of the law on the part of law enforcement. The Senator noted that possible problems are resolved in the courts and pointed to “the progressive approach of the Supreme court”. Klishas addressed the participants of the extended meeting of the Duma Committee on information policy with a request to propose the bills necessary changes. The head of the Committee Leonid Levin noted that innovations should not restrict freedom of speech and the rights of citizens.

“The legislators always have the risk that enforcers especially the police can abuse these or other provisions of law… These matters are dealt with in judicial practice… In particular the representatives of the HRC know these approaches. I know the approaches of the Supreme court, which today looks a very progressive practice that is emerging in the European court of human rights, not to mention the constitutional court of the Russian Federation”, — said Klishas.

Senator Andrei Klishas: during the development of the law on the abuse of power we took the ideology of “what is true for street — fair for the Internet”

The Senator proposed to take the bills in the first reading. “We are ready for constructive discussion, if there are any corrections, comments, additions”, he added.

The head of the state Duma Committee on information policy, Leonid Levin, commenting on a package of bills indicated that the level of development of modern technologies, every person actually possesses the capabilities of modern media and there is a risk of manipulation of public opinion. As pointed out by Levin, this was observed during a fire in TTS “Winter cherry” in Kemerovo. Then the Ukrainian prankster was circulated on the Internet about reports of hundreds of victims. “These [amendments of fake news] one of the first attempts to find solutions out of the information chaos,” — said the Deputy.