The bite force of a Tyrannosaurus Rex did not impress scientists

Paleontologists have constructed a model of bite forces of vertebrates, which allowed us to determine the force developed even extinct species. 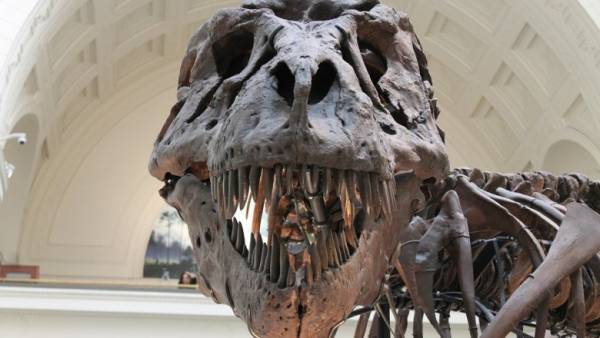 According to the results of the analysis of the bite force of Tyrannosaurus was very average for its size. The record will be released on a small modern poultry — earth reel — he surpassed giant lizard hundreds of times. The article was published in the journal Proceedings of the Royal Society B: Biological Sciences.

t-Rex couldn’t stick out his tongue

There is a hypothesis that a key factor in evolutionary changes of many large carnivores is the need to increase the force of the bite. That is, the selection in populations should favour individuals with the most powerful jaws that make them in the end, the owners of unique anatomical features, allowing it to dominate other species.

To test this hypothesis, biologists with the help of a supercomputer calculated the bite force of 434 existing and extinct mammals, reptiles and birds. The model predicts that the t-Rex, this figure amounted to 57 000 Newtons is the average value for animal weighing 8 tons. Among all the authors studied in this work, most impressive were the results of a large earthen Finch (Geospiza magnirostris) is a songbird that Charles Darwin found on the Galapagos Islands.

With a weight of about 33 grams his beak can be compressed with a force of 70 Newtons, that is, relative strength to body weight his bite is 320 times more powerful than Tyrannosaurus Rex.

“The image of a Tyrannosaurus Rex from the ferocious jaws helped him become the most famous dinosaur, but our work shows that its bite was not impressive. The bite force is not what gave him an evolutionary advantage, as suggested by previous research, says lead author Manabu Sakamoto from the University of reading (UK). Large predators such as Tyrannosaurus, developed sufficient bite force to kill the victims and breaking bones just due to his size and not because they were disproportionately strong jaws. This result rejects the idea that the need for exceptionally strong bites was the evolutionary reason for the development of these ancient animals.”

The owner of record, that is, losing the bite force higher rates during the evolution of species, was relatively recent human ancestors.

“Evolutionary compromise with the increasing size of the brain may be the cause of our very poor bite, added Sakamoto. — After the processing of food, the bite force has become even less important to us. As a result, we began to develop kitchenware, to make it easier to swallow food. It is also consistent with other studies that show that the person is chewing the food less other animals.”