“How much blood must be spilled?”: what trump has said of the nation

Trump made an appeal to the nation did not declare a state of emergency. 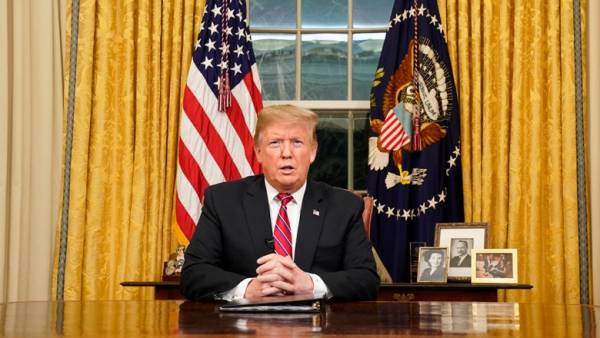 The President of the United States Donald trump in a televised address to Americans said about the growing crisis on the border with Mexico. According to him, the behavior of politicians who ignore this crisis, is “immoral”, and the Democrats should sit down at the negotiating table and adopt the budget for the wall. However, sources New York Times noted that even trump himself does not consider his speech to be effective. Supporters of the Democrats, in turn, accused trump of lying.

According to Donald trump, the wall on the border of US and Mexico needed to break the cycle of illegal immigration. He also added that all people in the USA suffer from illegal immigrants.

“The only solution (of a problem) is that the Democrats passed the law about the expenses that would protect our borders and would open the government,” said trump, noting that the construction of the wall will take about $5.7 billion. however, he argues that the wall on the border with Mexico “will pay for itself quickly”.

Here are the facts: In the last two years, ICE officers made 266,000 arrests of aliens with criminal records—including those charged or convicted of 100,000 assaults, sex crimes 30,000, and 4,000 violent killings. #SecureOurBorder pic.twitter.com/FMf1jDbkqN

— The White House (@WhiteHouse) January 9, 2019
The cost of illegal drugs (fall in US) exceeds $ 500 billion a year — much more than 5.7 billion that we’ve requested from Congress. The wall will also be paid indirectly through a new trade agreement that we signed with Mexico.Donald Trepresent USA

In a televised address to the Americans he also said that he had invited congressional leaders to meet, to resume the government, which as of 8 January has been up for 18 days. According to trump, the solution to the crisis on the border can be found in “45 minutes”.

Handling trump has also shown its readiness to make concessions, which from the point of view of the Democrats are probably questionable.

The President says that at the request of their opponents, the wall on the border with Mexico will be built of steel. He stressed that the barrier is necessary to protect the borders of the United States.