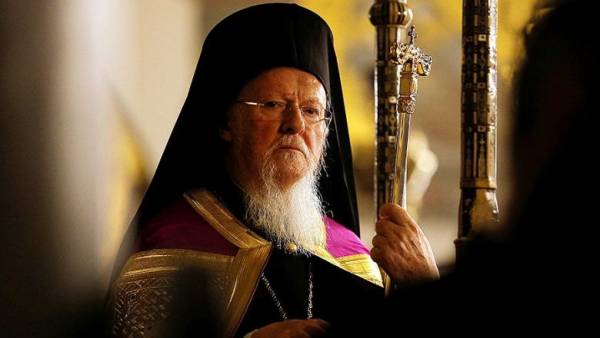 Before the ceremony, held a prayer service in the Church of St. George in Istanbul, and was attended by the head of the “new Church” of Ukraine Epiphany.

The event was also attended by Petro Poroshenko with his wife Marina, speaker of the Verkhovna Rada Andriy Parubiy, Minister of economic development, Stepan Kubiv, Minister of defense Stepan Poltorak, the ex-President of Ukraine Viktor Yushchenko and others.

Fifteenth day of December in Kiev on the initiative of Peter Poroshenko and Bartholomew held a “unification Council” with the participation mainly of non-canonical Church structures.

the Principle of separation of churches

The outcome of the event was the election of the head of the new “Autocephalous churches” Epiphany Dumenko.

In the Russian Orthodox Church the canonical value for “Assembly” in Kiev declared null and void, and the possibility of recognizing the Epiphany is hardly feasible task.

Recently, Bartholomew sent a letter to the patriarchs and archbishops, heads of the local Orthodox churches — with a call to recognize “the new Ukrainian Church.”

Metropolitan of Warsaw and all Poland Savva said in response that the Polish Church does not recognize the schismatic structure, and the “unification Council” has not solved the problem of schism, and only further complicated it.