In Kiev, nationalists staged a March in honor of birthday of Stepan Bandera. According to the Ukrainian media, people burn torches and sparklers, shouting “Glory to Ukraine!” and hand out holiday cards. Among the radicals can be seen as animators in costumes of snowmen. On the Maidan the leaders of nationalist movements utter political speech, and I congratulate Ukrainians with the New year and the birthday of Bandera. 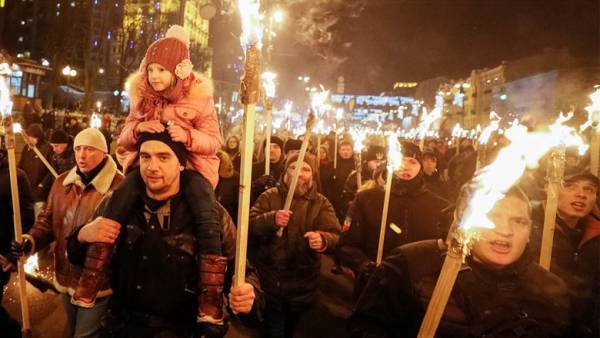 In Kiev, the nationalists hold a torchlight procession in honor of the 110th birthday of Stepan Bandera, the leader of “the organization of Ukrainian nationalists” (OUN, is prohibited in Russia).

The festive event began near the Opera house in the city centre. Representatives of various Ukrainian nationalist movements are systems in camouflage uniforms and hats. Participants of the rally carried placards and banners with pictures of Bandera, burn flares, shout “Glory to Ukraine!” and hand out holiday cards that say happy New year and happy birthday Bandera.

Since January 1, the Ukrainians also have a rest in honor of the New year, the participants combined the two holidays.

According to the Ukrainian edition Strana.UA the people in the columns are in Christmas caps and sparklers. The procession is led by animators dressed as snowmen.

According to the Ukrainian edition, the nationalists reached the square, where speeches. MP Andriy Ilyenko called 2019 “decisive for the future of Ukraine”.

“…If we’re not active and to carry your ideas to people, it will be critical situation. Only we — the Union of Ukrainians — will be able to resist the revenge of anti-Ukrainian forces. Ukraine will not save the clowns, oligarchs and Ukrainian nationalists”, — said the MP.

According to the newspaper “Vesti”, in the procession attended by about 500 people.

One of the deputies of the Verkhovna Rada semen Semenchenko criticized a festive procession in honor of Bandera’s birthday.

“Two-thirds “known bortsunov for Ukraine,” the greeting today is Stepan Bandera’s birthday, when his life would be hanging on the first bitch as traitors of the Ukrainian people”, — he wrote in Facebook.

The birthday of the leader of the OUN became an official holiday in Ukraine, according to the bill adopted by the Parliament in December. In addition, on December 22 the President of Ukraine Petro Poroshenko equated the members of the OUN and its military wing “of the Ukrainian insurgent army” (UPA prohibited in Russia) to the veterans of the great Patriotic war.