Pranker said Klitschko about the “drunken Poroshenko under the table”

MOSCOW, 2 Jan — RIA Novosti. New year’s eve pranker Vova, and Lexus called Vitaly Klitschko on behalf of the Prime Minister of Ukraine Volodymyr Groysman congratulated him on the upcoming holiday, telling about “a drunken Poroshenko under the table”. 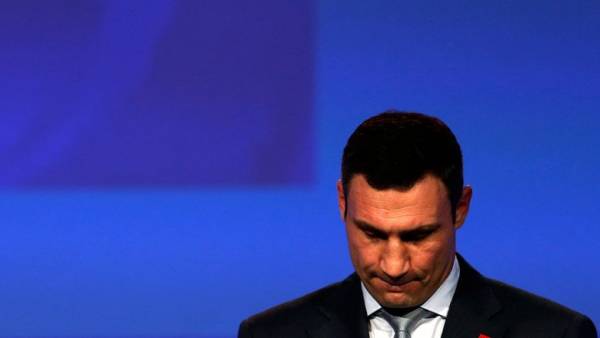 Klitschko congratulated “Groisman”, wishing that health, productivity and success in the new year.

“Well, we’re drunk Peter from under the table pulls out,” said one of prankery, from which hung a ten-second pause.

At this point, the mayor of Kiev has understood that became a victim of a prank, and then congratulated the caller a happy New year. “I wish you to breed more people to all conducted in your divorce, and gave you interesting information, because without you, life is honestly so boring” — with a laugh said Klitschko.

The mayor of Kiev difficult to answer the question, which of the prank liked him, citing a lack of time to read them.

“But with me, something you do not get, because you figure,” he boasted while Klitschko, the former President reminded him that he still managed several times to “breed”, after which he recognized their innocence.

“Well, you’re handsome, I see you have gone far enough, a new level came out, so it is good you celebrate, happy New year,” — said the Kiev mayor.

Thus the question of whether, in Kiev heating, the mayor replied in the affirmative. “With warmth all right. Don’t wait!”, — said Klitschko, after which he invited the media in the Ukrainian capital, noting that they will be surprised by the beauty of the city.

However, the former President said that the decision of the SBU they were denied entry to Ukraine.