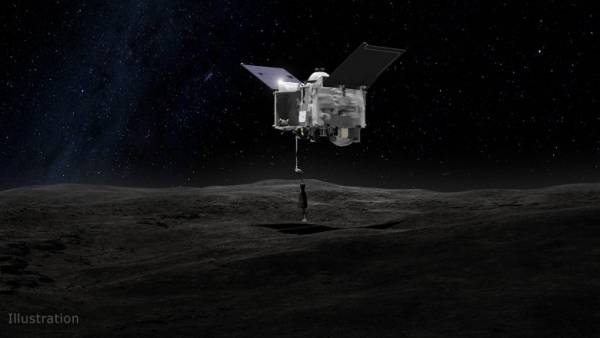 Probe OSIRIS-REx was launched in September 2016. His goal, the researchers chose the asteroid Bennu, formerly 1999 RQ36 room. The device has reached its working position at a distance of 20 kilometers from the 500-meter asteroid December 3.

“It’s official! I on the orbit of the asteroid Bennu — the smallest of the heavenly bodies, around which revolved the spacecraft,” — said in the account of the mission on Twitter.

Operation abstraction of soil particles from the asteroid is scheduled for mid 2020. According to the developers, the probe for five seconds, lower to the surface of Bennu three-meter retractable “hand” the TAGSAM (Touch-and-Go Sample Acquisition Mechanism) that plunges special agent, the particles of the material from the surface of the cosmic body. The creators hope that with the surface using compressed gas we can get at least about 60 grams of rocks, which will be delivered to Earth in 2023.

Selected as the object of study for the OSIRIS-REx asteroid was named in honor of the Bennu bird — the symbol of resurrection ancient Egyptian God Osiris. Cosmic body the size of 500 meters was opened by researchers from the LINEAR project of mit and, by calculations of experts, will approach the Earth in the year 2182. In 2013, it was reported that Benn was the main object potentially hazardous to our planet after the “cancellation” threat of the asteroid Apophis and other asteroids.