MOSCOW, 31 Dec — RIA Novosti. The latest Russian tank T-14 “Armata” will begin in 2019 for the state tests, said on Monday the Department of information and mass communications of the Russian defense Ministry. 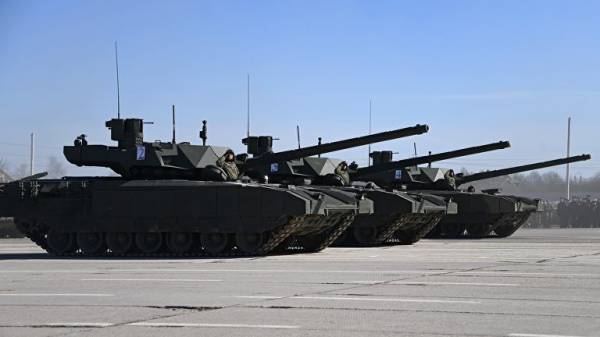 “In the interests of the Land forces was developed and is completing factory tests, the T-14 was created on a universal platform “Armata”. Fighting machine in 2019 will start passing state tests in the research institutes of the Ministry of defense of Russia”, — stated in the message.

In Department reminded that T-14 — the world’s third postwar generation tank. “This is a brand new and completely Russian development. Tower T-14 uninhabited. For the first time the crew is placed in an armored capsule separated from the ammunition,” — said in the Department.

Tank “Armata” is designed for combat in close contact with the enemy, support offensive infantry units, fortifications, enemy personnel located in shelters and in the open countryside.

Earlier, Russian Deputy Prime Minister Yuri Borisov said that the Russian Armed forces will not be mass to buy tanks “Armata” because of their high cost. Instead, less money will be spent on upgrading the existing armed with tanks, like the T-72.