Zakharov commented on the complaint of Bi-bi-si

MOSCOW, 30 Jul — RIA Novosti. The British broadcasting Corporation BBC has asked the Russian foreign Ministry with a complaint of leakage of data about its employees, said the official representative of the Ministry Maria Zakharova. 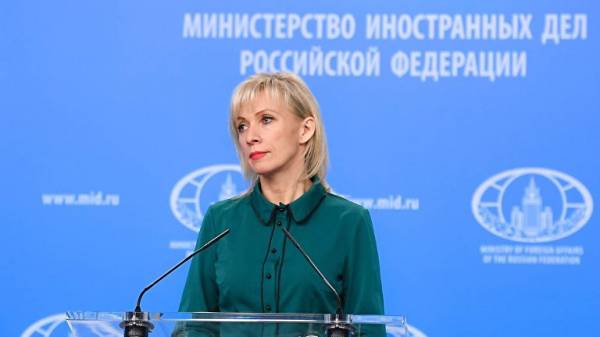 The BBC has previously stated that it has forwarded to the foreign Ministry a complaint after the publication of the personal data of the employees of its Moscow edition. The publication in the British Times names of journalists of the Bureau of Sputnik, the BBC did not respond.

“No complaints from bi-Bi-si on the end of the working day of 29 December was received in the Department of information and press, no one from bi-Bi-si not addressed: head Bureau never called or wrote. Even though all the phones they are well known,” wrote Zakharova in Facebook.

According to her, on Saturday at 16.55 in the foreign Ministry received a list of questions from a correspondent of the BBC, to which the Department responded, in particular, on its own initiative, drawing the attention of journalists, that no appeal from a Bureau in Moscow was not.

Best of all, our answers when writing the article of course was not included. This is a deliberate distortion of the facts. Amazing work by British journalists. They can only overtake British scientists.

“I regularly write and call correspondent Bi-bi-si in Moscow, when they want something. At this time, for several days did not call anybody. Why? Maybe we are waiting for instructions from someone in London? Not from those who poured into times list of the Satellite? London plays dirtier”, she concluded.

On Thursday a number of Russian Internet resources published the names and photographs of employees of the Moscow Bureau Bi-bi-si. In particular, a reference to a list of them posted on the resource pikabu.ru published by the TV channel “Rain” on its official website. The Corporation has stated that it is disappointed by the publication. Zakharova noted that this information is not secret and is available in social networks.