The principle of the separation of the churches

As in Ukraine deepened the Orthodox split. 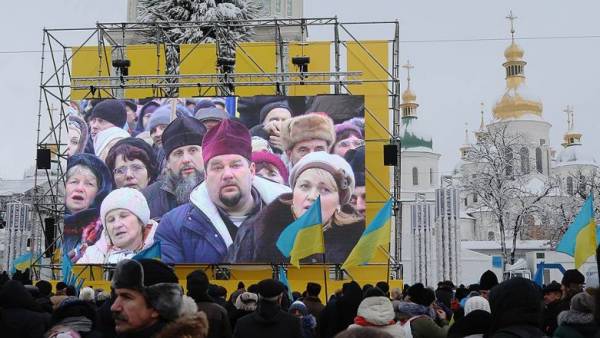 In April 2018, the Ukrainian authorities have decided to form their own Orthodox Church independent from the Moscow Patriarchate. With the support of Ecumenical Patriarch Bartholomew, contrary to Church canons, in Kiev was launched a process to establish a new Church. On 15 December there was the so-called unification Council of Orthodox churches of Ukraine. He was elected head of the new Church structure — it was Metropolitan of Pereyaslav and Belotserkovsky Epiphanius (Dumenko), the Hierarch of the Ukrainian Orthodox Church of the Kyiv Patriarchate. The Moscow Patriarchate called the Council a “robber hangout,” and the actions of Constantinople — “anticanonically infringe on other people’s Church’s inheritance”. In Moscow also believe that the new Church will be fully dependent on the Patriarchate of Constantinople. The correspondent of “Kommersant” Pavel Korobov summarizes the results of the Ukrainian struggle for autocephaly.

16 April 2018, the Verkhovna Rada supported the initiative of the President of Ukraine Petro Poroshenko to appeal to the Patriarch of Constantinople with a request to give the Ukrainian Orthodox Church-Kyiv Patriarchate autocephaly — independence. Speaking before Parliament, Petro Poroshenko said that the creation of a single local Orthodox Church in the country — “a tool not a religion, and geopolitics, a tool control in a hybrid war with Russia.” According to him, obtaining autocephaly for the Orthodox Church “will provide the final independence of Ukraine from Russia.”

In Istanbul, the Ecumenical Patriarch with the conversion of Peter Poroshenko with a request to grant autocephaly went Deputy head of the presidential administration of Ukraine Rostislav Pavlenko. The Patriarch said that it would study the request along with the other Orthodox churches. “The establishment of the Autocephalous Church — it is a process that cannot be initiated by the secular authorities, because, as you know, the Church in the modern States separated from the state and the state should not manipulate the Church,” — said Metropolitan Hilarion. He recalled that initially the split in Ukraine appeared as “former Metropolitan of Kiev Philaret Denisenko” solved thus “your personal problem”.

August 31, the Primate of the Church of Constantinople was visited by the Patriarch of Moscow and all Russia Kirill, who expressed the position of the Russian Orthodox Church (ROC) on the events in Ukraine. The delegation of the Russian Orthodox Church stated that it is impossible to grant autocephaly to the Church in Ukraine, because there is one official, recognised all over the world the Orthodox canonical Church — the Ukrainian Orthodox Church of the Moscow Patriarchate. Nevertheless the Ecumenical Patriarch on 7 September sent to Kiev for two of their “exarchs” — Archbishop Pamphylian Daniel (USA) and Bishop Ilarion of Edmonton (Canada) — “in preparation for the granting of autocephaly of the Orthodox Church in Ukraine.” Before that, the Council of bishops — the Synaxis Patriarch Bartholomew said that “taking the initiative to overcome the Ukrainian split, because Russia as responsible for the current painful situation in Ukraine is not able to solve the problem.”

“The decision was made without approval of the Patriarch of Moscow and all Russia Kirill and Metropolitan of Kiev and all Ukraine Onuphrius, said in response to the Holy Synod of the Russian Orthodox Church.— It is a gross violation of Church canons, bishops proscribe the same local Church to interfere in the internal life and Affairs of another local Church… and is completely contrary remained to this day unchanged position of the Patriarchate of Constantinople and the person of Patriarch Bartholomew, who has repeatedly stated that he recognizes his Beatitude Metropolitan Onufry the head of the only canonical Orthodox Church in Ukraine.” “The Patriarch of Constantinople leads to the false interpretation of historical facts and references alleged in his exceptional powers, which he in fact does not have and never had”, concluded the Holy Synod of the Russian Orthodox Church.

the creation of the “Ukrainian Autocephalous Church”. Help

On 11 October, the Synod of the Church of Constantinople reversed the decision of the XVII century on the transition of the Kyiv Metropolitanate to the jurisdiction of the Moscow Patriarchate. Another solution Constantinople removed the anathema from the former Metropolitan of Kiev, and is now unrecognized in the Orthodox world, Patriarch of Kyiv Filaret (Denisenko) and the head of the Ukrainian Autocephalous Church Macarius.

“The Cathedral can be considered predatory a bunch, — said the head of the press service of Patriarch of Moscow and all Russia Kirill, the priest of Alexander Volkov.— Any attempt to somehow bring everything that happened to the canonical norms of the Church and to hold any connection with the world Orthodoxy failed. Occurred the election of a new leader of the split was Filaret Denisenko, and became his henchman Epiphany. Being himself a schismatic, he has no connection with the world Orthodoxy, and all of these people have completely cut themselves off from opportunities to return to it”. “President Poroshenko, acting in the framework of his election campaign, — said “Kommersant” the Deputy Chairman of the Synodal Department for Church and society and the media Vakhtang Kipshidze.— In Ukraine, the Alliance created sectarian organizations, which is contrary to the Canon law recognized by the Patriarchate of Constantinople”. On 20 December the Patriarch of Moscow and all Russia Kirill addressed to the primates of local Orthodox churches with an appeal “not to admit the newly formed pseudoterminal structure and not to join with her in fellowship.”

In Istanbul stated that on 6 January 2019 Patriarch of Constantinople give to the Church of Metropolitan Epiphanios the Tomos of autocephaly. However, all major decisions will continue to be addressed in Constantinople. “Autocephaly that Constantinople is going to give you created at the end of “unification” of the Cathedral structure provides far fewer rights than those rights that are enjoyed by the self-governing Ukrainian Orthodox Church of the Moscow Patriarchate,” said Metropolitan Hilarion.