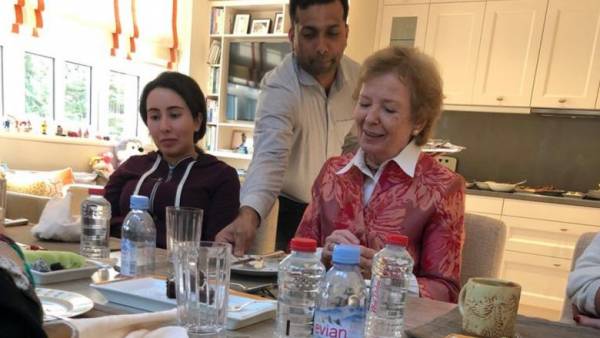 Pictures were taken during the meeting of the Princess with the former UN high Commissioner for human rights and former President of Ireland, Mary Robinson, who met Latifah in mid-December.

#UAE rebuts allegations regarding #SheikhaLatifa and issues images of her meeting with Mary Robinson, former President of Ireland, on December 15 in #Dubai. Officials say she is “receiving the necessary care and support she requires.” #EmiratesNews @DubaiOneTV pic.twitter.com/rm4cxYc9VY

According to Robinson, the girl repents that made a video accusing his father of cruelty and murder and is undergoing psychiatric treatment. Also, Robinson noted that the Princess “serious medical emergency” and she receives a “psychiatric help”. Because of the state Ratify the Royal family does not want to appear in public.

We will remind, in March 2018, Latif tried to escape on the boat out of the country, but was caught. Before escaping, she recorded a video message in which he told that her father is involved in many murders in the country. Turning to the audience, she noted that “if you are watching this video then I’m either dead or are in a very difficult situation.”

The video was published a week after the girl’s disappearance. In it, she said that in 2002 she made her first attempt to escape.

After she spent three years in prison. According to the girl, she was taken to a place that resembles prison where they were held for days in the dark and beaten. The guards said that the order “beat to death” gave her father.

Also Latifa al Maktoum told that her sister was trying to escape. She was caught, drugged and sent on a private plane back to Dubai. For some time the sister had been kept, and then sent for treatment to a psychiatrist.