The President of Kosovo Hashim Thaci signed a law on the establishment of the Kosovo army. He said that the army will provide the Kosovars with the best prospects for new generations. Thaci stressed that the package of decrees he proudly signed 10 years after independence. 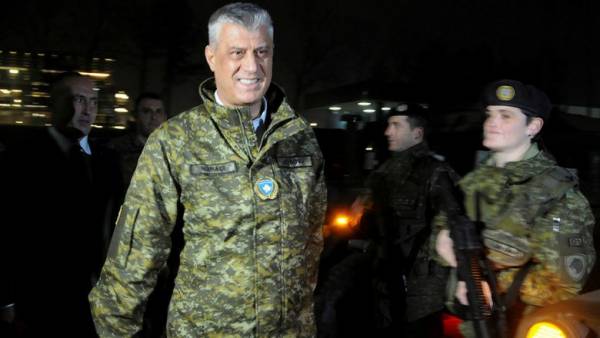 The creation of the army of Kosovo is contrary to the resolutions of the UN Security Council. Several countries that have recognized Kosovo’s independence, withdrew their recognition.

At the same time Kosovo has expanded the list of goods from Serbia, which Pristina intends to impose 100 percent duties. This applies both to products Serbian production and product brands non-Serb production, reports “Interfax”.

The Russian foreign Ministry fears that the creation of the army of Kosovo will lead to a new war in the Balkans.

It is expected that the army of Kosovo will consist of 5 thousand soldiers, and another 3 thousand bayonets will be in reserve. Spending on the army, according to the adopted laws will amount to 98 million euros per year.

November 21, Pristina imposed absolute duties on goods from Serbia and from Bosnia and Herzegovina. The decision of Pristina sparked protests in Kosovska Mitrovica.

The Prime Minister of Bosnia and Herzegovina Denis Zvizdic noted that the decision of Kosovo on fees wrongly, it destroys the Agreement of the Central European countries about free trade. Mention the duties demanded from Pristina and the European Union.