“Troops of uncle Vasya”. Why General Margelov called the father of airborne 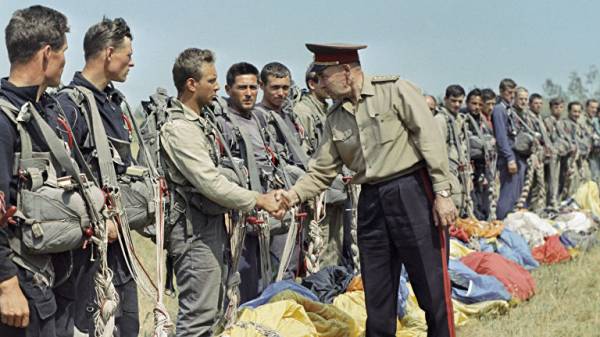 About how it made history — in the material RIA Novosti.

The service in the Red army Margelov called in September 1928 and was immediately sent to study in the United Belarusian military school in Minsk. With honors after graduating in 1931, Vasily was given command of a machine gun platoon in Mogilev. By the end of 1938 he was already a battalion commander and headed the divisional reconnaissance.

In the Soviet-Finnish war Margelov distinguished by the fact that captured officers of the Swedish General staff (officially, Sweden has not participated in the war, but the volunteers there were many). The great Patriotic war has met the commander of the infantry regiment. From the chief of staff and Deputy commander of the division to 1944 th Margelov has grown to the commander of the Ukrainian front. With his 49th division crossed the Dnieper and liberated Kherson, for which he was awarded the title of Hero of the Soviet Union. His soldiers liberated Romania, Bulgaria, Czechoslovakia, Hungary, Austria.

The first combat parachute units appeared in the red army in the mid-1930s, before Margelov. The fact that the Marines call him the founder of the airborne troops in the first place speaks to their infinite respect for the merits of “uncle Vasya” before this independent native troops.

Try yourself in the new role he was offered in 1948. After graduating from the Academy of the General staff Margelov placed under the command of the 76th guards airborne division in Pskov. The difficulty was that during the war the division fought as infantry and it just had “to attach the wings.”

And from that moment begins a new stage in the history of the airborne forces.

Margelov, despite the high office and the military services, along with employees mastered the skill of the paratrooper, I learned from the veteran details of new professions and the nuances of special training. Made the first parachute jump, learn to lay it. Later in an interview, he admitted that forty years vaguely imagined that such a parachute. During the service Margelov more than 60 times jumped with a parachute, the latest in 65 years.

In 1954 he was appointed commander of the airborne troops. Then in the military strategy of the Soviet Union in the event of a large-scale war paratroopers was given the role of supporting high rates of occurrence in a massive use of missiles and nuclear weapons. Therefore, airborne required relevant aviation and armored vehicles.

“In order to fulfill its role in modern operations, it is necessary that our units were highly maneuverable, covered with armour, had enough fire efficiency, well controlled, able to parachute in any time of the day and quickly move to active combat after landing. Here, by and large, an ideal to which we should aspire” — Margelov has defined the tasks of the airborne troops. Their capabilities and the ability to swiftly and effectively act airborne showed already in 1956 during the Hungarian uprising.

The commander worked closely with the military-industrial complex. Most of the development was created with his direct participation, and some of the weapons he tested it personally. Thanks to the efforts Margelov airborne received revolutionary at the time fighting machine landing BMD-1, BTR-D, a floating armored vehicles, modern transport aircraft an-8 and An-12. And later — “workhorses” of the An-22 and Il-76. Troops were also sent its newest small arms, portable anti-aircraft systems, grenade launchers, communications systems and engineering technology. Paratroopers were equipped with more reliable parachutes. And in connection with the adoption of armored vehicles for the airborne troops have developed a multi-dome and parachute-rocket landing system.

That is under the command of Vasily Lata airborne learned to parachute technique with the crew inside. And tests the crew of BMD was the son of General Alexander also connected the life with the airborne forces.

He externally graduated from the Ryazan higher airborne command school and the Military Academy of armored troops. In the winter of 1973, Alexander was dropped from the aircraft An-12 in a combat vehicle BMD-1. This has never been done in the world. The drops are personally supervised his father, Basil.

Margelov. Later colleagues remembered that “uncle Bob” throughout the operation, continuously smoked and he kept a loaded gun to shoot himself, if the son something happens. This step Margelov went in order to convince the Soviet defense Minister Marshal Andrei Grechko safe landing techniques with people on Board.

In January 1976, the son Margelov has set another record: thrown out of a plane BMD-1 crew for the first time in history, made a soft landing on a parachute-and-rocket system “Reactor”. Major Margelov, Jr. was in the car along with Colonel Leonid Shcherbakov. BMD parachuted with great risk of life, without individual means of salvation. Twenty years for the feat to both crew members were awarded the title of Hero of Russia.