Valentina Matvienko considers that the state must be protected from “deliberate insults”. 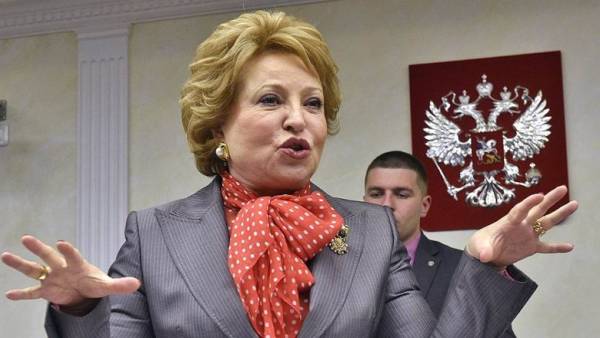 Resonant bills on the Autonomous Internet, the punishment for “contempt of authority” in the network and “false information” in the media “we need to discuss”, said “Kommersant”, the speaker of the Federation Council (FC) Valentina Matvienko. However, she has already spoken in support of the amendments: the fake news “unacceptable”, against the authorities “should be culture”, and the Russian part of the Internet it is necessary “to protect against possible cyber-attacks”.

No “not in a hurry to take” Autonomous bills on the Internet, the punishment for contempt in the Network and “false information” to the media, said Valentina Matvienko, answering the question “y” at a press conference on the results of the autumn session. This “draft laws” that “we need to discuss, to conduct a wide-ranging discussion, but from different sides,” she said. The speaker urged not to “gang up” on amendments “based on the title”.

We will remind, in December, a group of parliamentarians in the Duma introduced a package of bills aimed at changing the rules of information dissemination in the Internet and media. The amendment was criticized by representatives of civil society, and the head of the presidential Council on human rights Mikhail Fedotov has called the proposals “ill thought out and unconstitutional”.