Pigs will save Sochi

The mayor of the resort offered to attract animals to solving the garbage problem. 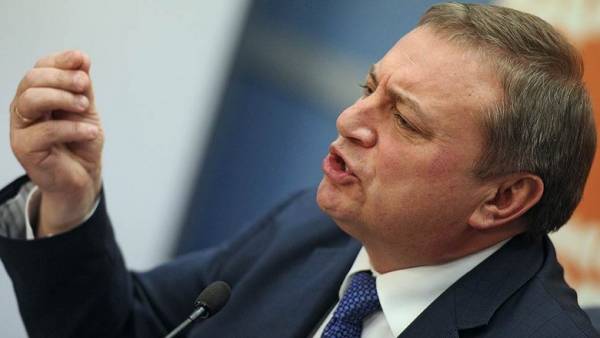 The head of Sochi Anatoly Pakhomov to solve the garbage problem in the city doesn’t recycle food waste, and to give to feed the pigs. It is planned to build an industrial pig farm, which will take half the waste of the resort. The corresponding proposal is to be issued in the investment project. Against beginnings are the breeders and ecologists.

The mayor of Sochi Anatoly Pakhomov said yesterday that the garbage problem of the area can be solved by recycling food waste in a dedicated industrial Park. According to him, we are talking about a pig farm, where the waste will be processed into food for animals. Mr. Pakhomov, cited data that about 48% of Sochi garbage is food waste.

The intent of the mayor, if the industrial pig farm will be processed up to the half of Sochi garbage, and about another 7% of plastic, wood and paper are recycled by local businessmen, disposal in landfills will be subject to only 30% of municipal solid waste. Thus, according to Mr. Pakhomov, the garbage question in the resort is virtually closed. The mayor instructed to make the appropriate investment proposal to present it at the held in Sochi in February investment forum.

“B” repeatedly told about the garbage problem in the city-resort. According to hall, today the city produces about 350 thousand tons of solid waste per year.

Now they are exported to the Belorechensky landfill (about 600 km). Previously the resort had proposed to build a waste incinerator plant (WIP). The company “RT-invest” (Rostec) announced plans to build here to 2023-2024 years of enterprise capacity of 55 MW. Incinerators could burn 550 thousand tons of garbage a year from Sochi, Tuapse, Gelendzhik, the Hot Key. However, the tender for the construction of the plant this summer was not held because of absence of demands, a new — yet to be announced.

“If the mayor of Sochi will be able to convince prospects of their ideas and to receive appropriate funding, industrial farm may appear in the vicinity of the city — says the analyst CC “Finam” Alexey Kornev.— As for attracting external funding (primarily private equity) in the presence of guarantees we can expect that the project will be attended by local businessmen.”

The project is not feasible on commercial considerations, such as waste disposal the farm has a high cost.Timur Nigmatullin analyst “Discovery Broker”

The National Union of pig producers (NSS) “b” said that to feed pigs waste not. “It is forbidden, — have told in NSS.— Waste in food animals is not allowed for the reason that their unknown chemical composition. For example, among the components of food waste can contain pathogens, ASF (African swine fever), which will lead to disaster”.

Alexey Kiselev, an expert of the project “Zero waste”, “Greenpeace of Russia”, believes that the implementation of the industrial pig farm in Sochi could turn into an environmental disaster on the coast. In his words, food waste are wastes of the 5th hazard class, that is low hazard for the environment. Waste of pigs, he said, are already waste 4 classes of danger, that is more dangerous. “In order to protect the masses, they should be kept in special ponds for quite a long time. In Sochi there is simply no space for the construction of such lagoons, and in addition, due to the high temperature in the resort of the swine waste will rot and emit a strong smell,” — says the ecologist.