In Japan, declassified materials of talks with the US on the Kuril Islands in 1960

TOKYO, 20 Dec — RIA Novosti, Xenia Naka. The Japanese foreign Ministry has declassified materials on the negotiations on the Kuril Islands with the United States in 1960. 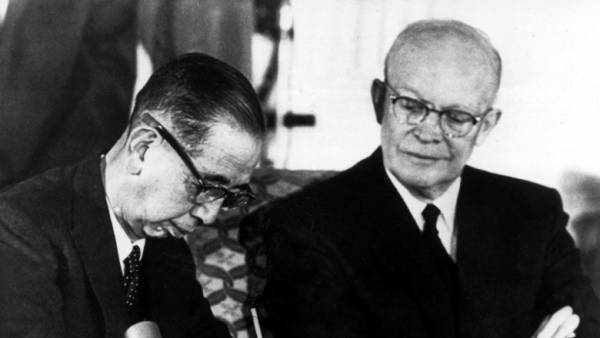 It follows that, Nobusuke Kishi, who was then Prime Minister, before a meeting with U.S. President Dwight D. Eisenhower was prepared to discuss the question of the possibility of consent of Japan to receive from the Soviet Union only two, not four Islands the Southern Kurils.

“In recent years in our country sometimes discussed the opinion that it is necessary to solve the problem (of the Islands. — Approx. ed.) “Habomai, Shikotan plus “alpha” (a kind of additional condition. — Approx. ed.) and sign a peace Treaty,” the document says.

The arguments given the requirement of Japanese fishermen to agree to return a group of Islands Habomai and Shikotan, provided the recognition of the Soviet Union some of the potential opportunities in connection with the Kunashir and Iturup “or subject to guarantee safe fishing in this area”.

Relations between Russia and Japan for a long time darkens the absence of a peace Treaty after the Second world war.

Step sideways. That will give Russia a peace Treaty with Japan?

The Japanese side’s claim to the Kuril Islands — Kunashir, Shikotan, Iturup and group of Islands Habomai, referring to bilateral Treatise on trade and borders of 1855. In 1956 the parties signed a Joint Declaration. Russia expected that the document will put an end to the dispute in Japan, however, considered the agreement a part of the solution to the problem without abandoning claims to all the Islands.

Moscow’s position is that the Islands became part of the Soviet Union at the end of the Second world war and the Russian sovereignty over them cannot be questioned.