Our great contemporary. Principles of life by Galina Volchek

Betrayal of Director, the artistic Director of the legendary theatre “Sovremennik” Galina Volchek does not forgive anyone — neither the husband nor the artists. 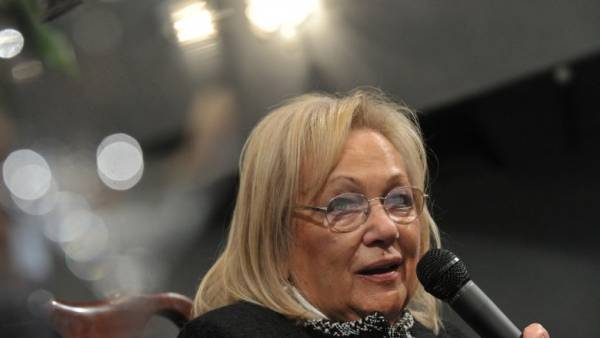 Galina Volchek was born on 19 December 1933 in Moscow. Her father is a famous film Director Boris Volchek Izrailevich, winner of three Stalin prizes, the operator of the film “Pyshka”, “Lenin in October”, “Murder on Dante street”. Mother — writer Vera Isaakovna Mimina. When Galina was 13 years old, my parents decided to leave and asked her who she would like to live after a divorce.

“I chose dad is very gentle and kind, — told “AIF” Galina Borisovna in an interview. — Crazy I was about him. By the way, all of our best operators have been his disciples. Of course, I can’t pay so much attention to light and color as father, I don’t have time for this, but the influence dad has had on me is very strong.”

The main business of her life was the theater “Contemporary”, which she has made home for many artists, Valentin Gaft, Marina Neelova, Leah Akhedzhakova, Sergey Garmash and others. Theatre, according to Volchek, not created “for razvlekalovki. Once the “AIF” asked Galina Borisovna question: “the web is totally engulfed the minds of young people… will Not disappear if some types of art over time? For example, the theatre?”. Volchek said with indignation: “This is an issue for me wild. I don’t think the scene and the Internet close things.

Still the energy is completely different in the theater. Theatre will always be. Yes, the public is another. But life is different from what it was 50 years. And yet now the audience wants to come to the theatre. To empathize, to find the answer on any your question.”

Vouchak calls himself a “slave of light and color”. She is only comfortable when there is light, but the shadows on it has oppressive impression. But the slavery of color, according to the Director, is that she “sometimes even before the disease carefully selects the harmonious combination of colors in clothing. Maybe I genetic from my dad, who was a cameraman from God, and very clearly and carefully distinguishes in this sense, the harmonious from the inharmonious.. I Know which method I invented to relieve the brain? Think of clothes in my head… will Model a pair of bright outfits, and the brain switches”.

Volchek is one of those rare women who always dressed in ultra-bright and cheerful tone. It will not see in gray or black.

No, it will always be a fiery orange, turquoise sky blue, Sunny yellow, bright pink outfits. Plus unreal beauty trendy scarves, chic sunglasses, large expressive rings, earrings with natural stones. And the final touch — Volchek always redolent of rare, selective aromas, among her favorites — a world famous brand in the Sultanate of Oman.

As for the fate of women, Volchek, as she says, “had two husbands, several novels and one error.” The first marriage of the Director was the famous actor Evgeni Evstigneev. But when their son Dennis was three years old, the couple broke up. Volchek, after learning about the betrayal, treachery was not able to survive. She even betrayal can not stand, neither from men nor from the actors. Once one actor called in sick, performance in the “contemporary” had to be cancelled. And then it turned out that the actor played in the entreprise tonight. In the morning he was fired.

For my son Denis Galina managed to build such relations with Evstigneev that former spouses have become great friends and advisers to each other. Moreover, if she married ex-husband at the young actress Irina Zybina!

“We lived together for a long time by Yevgeny Alexandrovich not painted, — told “AIF” Zybina. But Galina Borisovna Volchek, who was exhausted from what we just shack up, said, “Jack, well, what of that? Denis married Mary married, and you with Irina all live and live. Perhaps, as a woman, she wants to marry. He came to me and said, “marry me”.

I’m not surprised at such generosity on the part of the former wife, though usually women are jealous of the new girl. Galina — intelligent woman, and if you know her, the theater has Masha — the daughter from second marriage Evstigneeva, she took it. We went to visit Galina Borisovna very often and still communicate very well. I saw she was pleased that I disguise Yevgeny Alexandrovich. But with the second wife Evstigneeva Liliya Dmitrievna, even if you don’t know what the relations were. At home we had a wall on which hung all sorts of portraits. “It’s my medals,” — said Evstigneev. There hung favorite artists, Mary hung, Lily hung, the Atlanteans, the late Jean Gabin. But there was only Dennis their son with Volcheck. And I say: why are there no pictures of Dennis? After all, it’s your son. Yevstigneyev says: “we can do that?” I say: of course you can. Apparently, Lily Dmitrievna was forbidden to see a picture of his son from his first marriage. When this photo appeared on the wall, Galina Borisovna is very appreciated. Masha and Denis got together when she was 15 years old, they have long been strangers.

Usually on my birthday she tried to leave Moscow, but this time change tradition. There is, for what: 19th Dec re-open the doors of an old stage of “Sovremennik” in Chistoprudny Boulevard, which for several years was under repair.

If Galina is healthy and going to live theater, saying all of its wards. The famous theater Director is still keenly interested in what is happening in the country and in the world and never indulges in nostalgia: “I prefer to live for today, here and now. If all the time to remember the past, it means that the current life you live. I want to live in the present — there are a lot of good, if you look at life positively,” said the legend to the correspondent of “AIF”.