As mentioned by Vladimir Putin at the big press conferences

The next annual big press conference will be held on December 20. 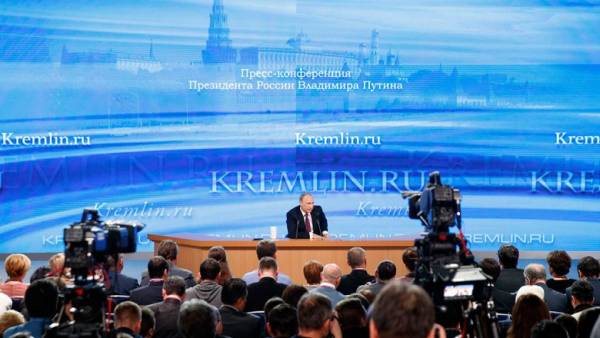 The President does not restrict journalists in selecting the communication. Issues tend to affect a variety of areas of internal and foreign policy of Russia, sometimes they also affect the personal life of the President.

On 18 July 2001 Putin holds the first major press conference. In the course of it the journalists ‘ questions, particularly related to the work of the government and the state Duma, the state of the Navy, the burial of Lenin’s body, etc. Speaking about the military reform, the President said that the army should be lean, but not costly. The head of state stressed the inadmissibility of repetition of the situation when the arms race “has largely been one of the reasons that has undermined the economy and, as a consequence, public confidence in the state.” In his answers Putin stressed that one of the main achievements of recent years, he believes the establishment of a “social consensus” that enables to develop the economy.

On 24 June 2002 Putin was answering questions, addressing corruption, regional policy, Russia’s accession to the WTO, NATO expansion, the situation in Chechnya etc. the President stressed that he knows and feels, “than the lives of the ordinary Russian citizen” as “living in the presidential residence for two years, but nearly 30 years he lived in a communal apartment in Leningrad.” He noted a great danger for the state, inciting ethnic and religious hatred, saying that “if we embark on this slippery slope, we don’t save”.

20 June 2003 most often, the President was asked about the upcoming presidential elections, party building, changes in government and the influence of big business on the country. The President, in particular, said that over the past two or three years adopted many laws, how many from the beginning of 1990-ies did not take, “of such updates, such reconstruction, upgrades never in the history of our state was not.” Putin ended the meeting by answering the question “Who are you and who are you?” with the words:

I’m the President of Russia, I with their constituents and with the people of Russia.2004

23 Dec 2004 the journalists ‘ questions concerned the enlargement of the Russian regions, monetization of Russia’s relations with Georgia and Abkhazia, etc. Referring to the post-Soviet space, Putin stated that he is concerned about the resolution of conflicts in an illegitimate way. According to him, the most dangerous — “the creation of a system of permanent revolutions.” “We have to live to get used to the law, not political expediency, which is defined somewhere in other place for other people,” said the President.

31 Jan 2006 most popular among the media used the theme of internal policy of Russia. The head of state answered questions on municipal reform, national projects, demographics, moving the constitutional court to St. Petersburg, the Russian-Ukrainian issues in the gas sector.

Putin did not say who he sees as his successor, despite the fact that it asked in different ways at least three times.

On a question, whether Putin the results of his five years of work, the President replied that “man can never be satisfied with the achieved results, if he is of sound mind and memory.”

February 1, 2007 among the topics the presidential press conference was the upcoming parliamentary and presidential elections in 2007 and 2008, the fight against corruption, energy, the development of the Far East, the problem of migration, the status of Russian military bases in Transcaucasia. The head of state noted that there was “another most effective way of combating corruption, in addition to the development of civil society and freedom of mass media”. Putin was named as the main problems in the social sector “inequality in income between the various categories of our citizens.” On the question of whom Putin can call his friend, the President joked:

Addresses and appearance want to? I, of course, there are personal friends. It’s usually people from my student time, from childhood, my colleagues on past activities: and security agencies in the city of St. Petersburg.2008

February 14, 2008 Putin, in particular, said that he is not ashamed before the citizens who voted for him twice, electing the President of the Russian Federation: “All these eight years I plowed like a galley slave, from morning till night, and did it with full return of forces…” Talking about future plans, he remarked that he prefers “not to moan about the fact that this period is over, be glad that there is an opportunity to serve the country in another place.” The question is what the Russian problem is more “tired”, Putin answered that it is corruption, and that “no such tablet from corruption: one, swallowed and everything, and the state has recovered”.

20 Dec 2012 posed at the press conference was about the status of the judiciary, direct elections of governors, criminal cases against oppositionists and officials, deoffshorization of the economy, the return of winter time. One of the main topics was the reaction of the state Duma adopted in the United States “Magnitsky act”, in particular the prohibition of U.S. citizens to adopt orphans from Russia. The head of state noted that “in General, the work and the Prime Minister and the government satisfied,” and recalled that knows firsthand, how difficult this work: “There, that is, directly from the stove to stand, or in the pit, as miners say, direct responsibility for the decisions”.