The new President of Georgia has avoided opposition accompaniment

Salome Zurabishvili has vowed not to accept the “Russian occupation”. 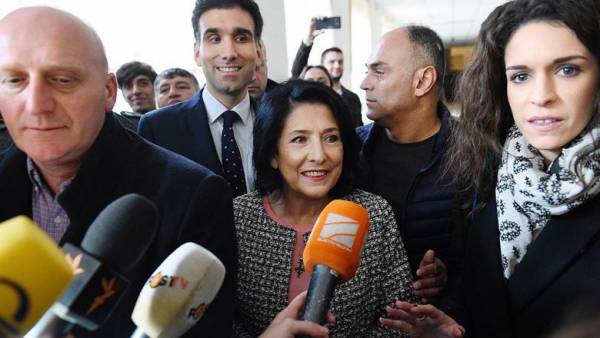 In the town of Telavi, in Eastern Georgia, on Sunday held a ceremony of inauguration of the fifth President of the country Salome Zurabishvili. The “United opposition” and its leader Grigory Vashadze, the loser Zurabishvili following two rounds of presidential elections, tried to stage near the Royal Palace, where the inauguration took place, a protest rally, but the police did not allow the opposition into the city, blocking all roads from Tbilisi to Telavi. In a speech immediately after the swearing in, Mrs. Zurabishvili promised “not to tolerate Russian occupation” and called Russia “a neighbor of the Caucasus”, who needs to learn civilized norms of relations with the Caucasian States.

Simultaneously with the inauguration came into force a new Constitution, according to which Georgia finally transformed from a presidential into a parliamentary Republic.

To participate in the inauguration of Salome Zurabishvili in Telavi, delegations from 55 countries. Among the honored guests — the President of Armenia Armen Sargsyan and ex-President of France Nicolas Sarkozy. The arrival of Mr Sarkozy caused outrage of the former President of Georgia Mikheil Saakashvili. In address to the nation, the former President said that Sarkozy “is everywhere where he is paid money.” Mikhail Saakashvili expressed confidence that this time, Nicolas Sarkozy “has received money from Russian”, in order to give legitimacy to “the protege of Moscow, Salome Zurabishvili” and “to fulfill the whim of a Russian oligarch, billionaire Bidzina Ivanishvili”, who heads the ruling party “Georgian dream”.

In the same address Mr Saakashvili urged hundreds of thousands of supporters who voted in the presidential election for the candidate from “United opposition” Grigol Vashadze, to the town of Telavi and “radical answer to a radical challenge to the Pro-Russian forces.”

“Pro-Russian”, Salome Zurabishvili, ahead of the second round of the presidential election of Gregory Vashadze almost 20%, the opposition argued, first, numerous allegations of fault of Georgia and personally Mikheil Saakashvili of unleashing a “five-day war” of 2008, a selection of the location of the inauguration: Telavi — the former capital of Kakheti Kingdom. The penultimate king of Kartli-Kakheti from the house of Bagratuni second Irakli Bagration in 1783, signed with Russia the Treaty of Georgievsk, after which Georgia joined the Russian Empire.

The opposition suspected that insisting on holding the inauguration ceremony in Telavi, and on the spot where once stood the Palace of king Erekle, Salome Zurabishvili allegedly sending a “secret message to Moscow” about readiness to negotiate and to reach a historic compromise with the “Northern neighbor.”

However, in his inaugural speech immediately after the swearing in, the fifth President was quick to refute these suspicions. According to Salome Zurabishvili, “it is symbolic that the President is elected by a descendant of the Georgian exile, banished from their native land by the Russian army after the occupation of 1921”. The current Russia’s new President is also called “the occupier” of Abkhazia and South Ossetia, complained about the constant movement of “occupation line” deeper into the Georgian territory, which, according to her statement, “invaders kidnapped citizens of Georgia.”

President Zurabishvili promised “not to accept the occupation of Abkhazia and South Ossetia”. The main priority of his presidency, she called the country’s integration into NATO and the EU.

The newly elected President called for “the restoration of the historical role of Georgia in the Caucasus”, called Russia “a neighbor of the Caucasus” and called on Moscow to “respect international law” in relations with the Caucasian countries.

In the moment when Salome Zurabishvili said the oath and inaugural address, the column of the opposition led by Grigory Vashadze tried to break in Telavi, to the square near the Palace of Heraclius to organize a rally of protest against the “stolen election”. In this case, the inauguration would take place to the accompaniment of speeches and chant slogans against Zurabishvili. But the police blocked the road near the village of Velistsikhe, a few kilometers from Telavi.

The opposition was unable to break through police cordons built buses that the authorities have blocked the Central highway and all of a bypass road. As a result of the clashes several people were injured, but to enter in Telavi, in fact, could only opposition candidate: Gregory Vashadze gave interviews to journalists at the fence of the Palace of Irakli, calling Salome Zurabishvili “illegitimate President”.